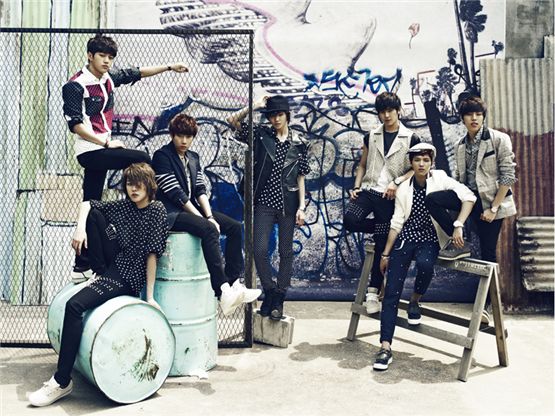 Korean boy band INFINITE has been added to the lineup of one of Japan's largest summer music festival, Summer Sonic.

Following the announcement of popular Korean bands joining the outdoor fest -- including Jang Ki-ha and Faces, Guckkasten and Jang Keun-suk's project duo Team H --, INFINITE has been set to grace the stage opening in Tokyo and Osaka on August 18 and 19.

The seven-member idol group will take the Mountain Stage at the QVC Marine Field in Tokyo on August 18, along with famous international artists.

Some of the big name musicians that will perform that day are Sigur Ros, the Hiatus, Death Cab for Cutie, Passion Pit, Crystal Castles, Alexandra Stan and the Knux.

INFINITE will continue to have some fun at the music party the next day, at the Mountain Stage at the Maishima Summer Sonic Osaka site in Osaka. INFINITE -- composed of Sung-kyu, Dong-woo, Woo-hyun, L, Sung-yeol, Hoya and Sung-jong -- broke into the K-pop scene with the first album, "First Invasion," in 2010.

The group expanded their singing career into Japan with "Before the Dawn (BTD)" in November of last year, placing it in second on Oricon's single chart and in seventh place on the weekly chart.

They followed it up with their second Japanese single "Be Mine" in April and also visited several cities in the country to promote themselves.

Into its 12th edition, Japan's Summer Sonic has been acknowledged as one of Asia's representative music festivals. K-pop artists Big Bang, Girls' Generation and BoA have previously graced the stage during previous events.