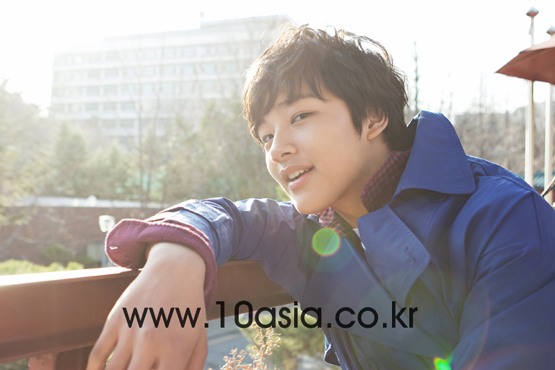 Standing against the dark wall, Yeo Jin-goo stared at the camera blankly. Without a doubt, he is the same boy wearing a blue trench coat on the terrace; but something was different between those two. Maybe it was the different vibe that crown prince Hwon from MBC’s “The Moon Embracing the Sun” and the 16-year-old boy from “I’m Real Yeo Jin-goo in Italy” gave off. From playing the heartbroken crown prince Hwon, he came back to a normal ninth grade kid who finds his joy with something as little as a gelato ice-cream. “When I played in ‘The Moon Embracing the Sun,’ I told myself that I should be humble, like a rookie actor,” Yeo said, as he laughed about the drama’s episodes. “I don’t know what having a first crush feels like yet, but I just want to be no more or less than a manly guy when I grow up.”

The followings are excerpts from an interview with actor Yeo Jin-goo. <#10LOGO#> We heard that you chose the travel destinations for the program, “I’m Real Yeo Jin-koo” in Italy.” Why did you want to go to Italy?
Yeo Jin-goo (Yeo): When I was in elementary school, historical sites in Italy, such as the Colosseum, were always included when studying about historical sites in the world. I wanted to see it with my own eyes. And because I hear people talking about Italy a lot, it made me feel familiar with the country. Though it felt good to go to the country I wanted to travel, Italy was not as close as I thought.

“I don’t look like a student in middle school.”

<#10LOGO#> In the show you appeared recently, you didn’t look like an actor but looked like any other 16-year-old kid. You were wandering the street alone and almost lost your bag (laugh).
Yeo: I didn’t realize that I was that bad in finding directions. My mom and my manager are with me all the time when I’m in Korea, so I had no idea that finding directions was going to be that hard. I thought the producers were going to do some magic on the video and make me look like a mature kid traveling alone. But when I watched myself in the video before it aired, I was constantly asking myself, ‘Where am I? Huh?’ Having a map was no use. <#10LOGO#> Didn’t you worry about losing your cool image gained by playing Lee Hwon from “The Moon Embracing the Sun”?
Yeo: People have fantasies about celebrities on TV. I thought just being myself on the show would lessen such burden as a TV star. The viewers would think that I’m still young and I that’s exactly what I wanted. It was a chance to show who I am in real.

<#10LOGO#> What kind of fantasies do you think people have about you?
Yeo: People tell me that I look smart (laugh), or that I look like I’m talented in everything. But I’m not. I have things that I’m not good at and I make mistakes too. Whenever people compliment on the things I do, I get worried because I’m not as good as they think. Haha.

<#10LOGO#> Maybe your mature image makes you look professional.
Yeo: I’m aware that I don’t look like a boy in my age. I don’t look like a student in middle school. Maybe 10th or 11th grade? Adding to that, I have a low voice and people see me older than my real age. My friends ask me if I’m making my voice like this in purpose, but this is my normal voice.

<#10LOGO#> Director Kim Do-hoon, from “The Moon,” said that he wanted the viewers to ask themselves ‘is it okay to feel attracted to a young man?’ by casting you to play the role.
Yeo: I didn’t know his intentions when we were together at the script reading session. There were scenes where I wasn’t so sure if I’m doing right but the director kept telling me that it was okay. I would just go on by trusting his insight. I’m glad that people liked my acting in the drama.

<#10LOGO#> You said you were really immersed into crying scenes in the drama.
Yeo: It was my first time for the tears to just run down my face. Few years ago, I had to imagine horrible things happening to my family to stimulate my emotions. But this time, the script itself was enough to make me cry. So now I feel less guilty towards my parents (laugh). I think I’ve grown in terms of acting through the drama.