[REVIEW] Film "The Day He Arrives" 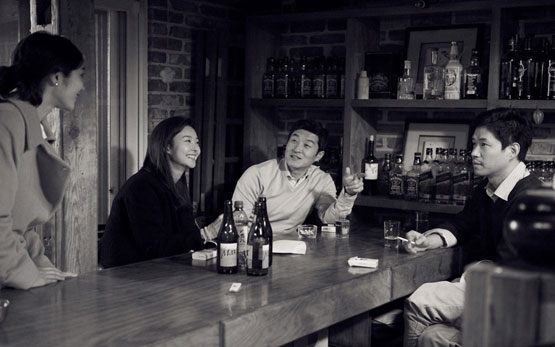 A scene from film "The Day He Arrives" [JEONWONSA]

Film director-turned-college professor Seong-jun (Yu Jung-sang) arrives in Seoul's Bukchon to meet his close friend and film critic Young-ho (Kim Sang-joong). The two eat with with Young-ho's close junior Boram (Song Sun-mi) and actor Joong-won (Kim Eui-sung) who appeared in Seong-jun's debut pic and then go to a bar in Bukchon. The bar's owner Ye-jeon (Kim Bo-kyung) looks so similar to Seong-jun's ex-girlfriend Kyung-jin (Kim Bo-kyung) that it is as if they are identical twins. During a three-day (or perhaps variations of or repeated) visit, Seong-jun and Ye-jeon walk on a snow path, share an unexpected kiss and spend a overwhelming night together.

Scenes from film "The Day He Arrives" [JEONWONSA]

He may have meant it but "making a quiet, clean and well-behaved passing through Seoul" was Seong-jun's original determination. He was only going to meet Young-ho and nobody else. But a human being's determination will immediately get disturbed by fate. As if challenging himself to Boram's fate where she "ran into four people related to the film industry in 20 minutes," Seong-jun too runs into an actress (he is not too happy to see) on the street, a fellow director (who has become annoying after becoming successful), a musician (whose name he does not remember) and a fan (with a peculiar energy). To top it off, Ye-jeon, who looks exactly like his ex-girlfriend, appears in Seong-jun's already not quiet and not well-behaved time in Bukchon. And after his encounter with her, he is no longer his old self.

The movie may be named 'the direction of Bukchon' in Korean, but Hong Sang-soo himself is a director without direction. One can find no relationship whatsoever between Jeju, Tongyoung, Bukchon and Buan. One can also not judge him based on what is said of the growth or improvement of his work. But he always goes to a new location. It is meaningless to ask him where he is headed -- one will probably have a much more enjoyable time watching his work by following the coordinations of his movements.

Filmed in color yet shown in black-and-white, "The Day He Arrives" smudges the boundary between day and night in the movie, while regardless of the physical intensity of radiation on the screen, by constantly flicking on and off its characters' emotional switch. The scene where a man and woman share a kiss on a street at night is as bright as daylight and the moment that a man stops in front of a fan's (Ko Hyun-jung) camera lens while walking the street of Bukchon alone, a flash of light passes, as if having stumbled upon a lighthouse at nighttime. Hong Sang-soo's movies are not about his stubborn attempt at deducing certain results he wants to prove correct. Rather, they are closer to being his rash challenge to look at human beings (or at least himself) without prejudice. That is also why each of his films cannot be considered complete, yet also why every film has value. "The Day He Arrives," which shakes about time and overlaps characters, is probably his most warm-hearted record of an experiment from wintertime. ※ Any copying, republication or redistribution of 10Asia's content is expressly prohibited without prior consent of 10Asia. Copyright infringement is subject to criminal and civil penalties.