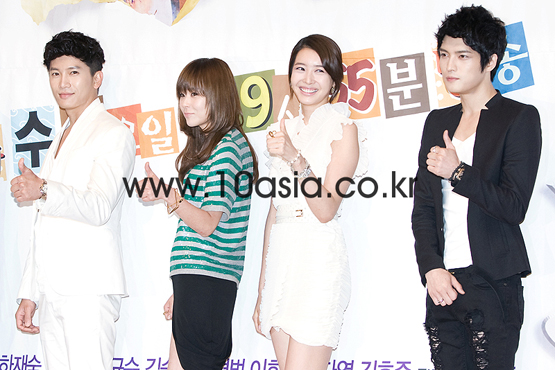 Cha Ji-heon (Ji-sung) is the team manager and director of business strategy at DN Group, as well as the son to the firm's chairman (Park Young-kyu), and Noh Eun-seol (Choi Gang-hee) who had always flunked at job interviews, somehow ends up becoming Cha Ji-heon's secretary. Hence, us viewers may think that SBS TV series "Protect the Boss" sounds familiar in that it portrays on the romance between a wealthy man and an average woman. But Ji-heon is not irritable or cool-headed like Kim Ju-won (Hyun Bin) of SBS drama "Secret Garden" or Hyun Ki-joon (Kang Ji-hwan) in "Lie To Me." Rather, he gets scolded by his dad everyday from his lack of ability to fulfill his responsibilities and is "better suited with the words 'loser' and 'sloppy.'" On the other hand, Eun-seol, who uses her fists before words, is a woman with a boyish personality.

At the press conference held on Wednesday, director Son Jung-hyun said that the show took off from how he started thinking about "the fun things that would happen if an heir to a conglomerate family and a woman representing the generation with little job security, were to face each other without being aware of such circumstances the other person is in." And that is why somewhat exaggerated incidents unfold in "Protect the Boss." There definitely is exaggeration yet humor in the way that Eun-seol ends up fleeing from a scene where she knocks down several gangsters with her high heels in front of Ji-heon or somehow ends up making it into DN Group after telling Ji-heon's cousin Cha Mu-won (Kim Jae-joong) during her job interview, "How would people like you that don't treat humans with even the least amount of respect, lead a company?"

Hence, in such a setup, the cast's acting is important element to the drama which could influence it in its entirety. Ji-sung, who for the first time is taking up comedic acting through the show said, "My mind is at ease even while I'm acting because I don't need to try to look cool. I'm developing on my character based on my actual self so I feel comfortable." And in a video shown at the press conference, displaying the way in which Ji-heon, with his short permed hair tries to act cute in front of Mu-won by saying, "You've put on make-up or something?", can be given passing marks. It is just that as much as he is "someone who seems to have stopped aging because of the pain from his older brother's death when he was young," his main task will be to express that pain inherent within him well. Choi Gang-hee, who has experience acting a delinquent disabled person whose specialty is fighting in film "Goodbye Mom," is natural at pulling off the scenes where she brings down gangsters and male students with her kicks, but she must too in detail, show how "Eun-seol, as someone who once was a problematic person, will come to cure Ji-heon and them each other." Another point worth watching for will be how Kim Jae-joong, appearing on the drama of a Korean public network for the first time, will do well in depicting on the emotions he feels while fighting Ji-heon for power and his in love triangle with Ji-heon and Eun-seol.

MBC's romantic comedy "Heartstrings" is struggling with low ratings and KBS's historical romance drama "The Princess' Man" has yet to show signs of doing better so "Protect the Boss" seems it has enough to draw in female viewers in their twenties and thirties. How successfully will "Protect the Boss" be able to land in the Wednesday and Thursdays primetime spot that will be left behind by SBS' "City Hunter"? The show premieres at 9:55 p.m. on August 3.