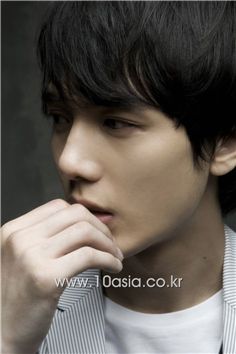 My name is Kim Sihoo. My real name is Kim Young-joon.
I was born on January 2, 1988.
When I auditioned for film "Sunny," I acted the scene where I save Nami (Shim Eun-kyung) who is being bullied by a gang. And there was a part where I'm supposed to fall over suddenly, after I save Nami and the gang has run away, so I did where I thought it would be good to which made everybody crack up because things had been so serious up till then.
I think that the Jun-ho in "Sunny" is someone who likes to fantasize about things and from time to time, says philosophical things. There was a line where he says, "I don't know why people have to fight with such weapons. They'd be able to communicate on a global level if they loved music," but it got cut out, I think because it made the movie too serious.
I had always wanted to play a character who is supposed to be good-looking like him. And I had gotten offers to be such characters after my debut role in "Sharp" but I thought that I could play those later so I took on projects that I'd be able to improve my acting skills in. I also came to realize that what people wore in the '80s wasn't as out of fashion as I thought it would be.
I think the grownup Jun-ho aged beautifully because he used to listen to music all the time as a student and he ends up setting up a cafe where he has people let him listen to the music he loves so much. I guess he could've ended up becoming a famous composer or musician as well but he's always been the type that likes to listen to music more than singing it. I too would like to age acting which is what I've enjoyed to do since I was young. It's what I will definitely do.
Filming the kissing scene with Min Hyo-rin was extremely awkward. I'm so taciturn that we weren't really on speaking terms on set other than saying hello so when we had to shoot the kissing scene, I didn't show it but I was nervous all day long. Also, the director called us over and told us that he wanted the scene to be realistic and told us how to go about it. That was supposed to help us out but... I'm just not like that.
I have three puppies. And I named them after what they look like or their personalities.
I feel uncomfortable when people recognize me. Some people like being recognized but I think I'll have to be at least 30 to get used to it and react to it properly.
And by then, I hope I'll be a considerate person. I want to look out for younger actors who can't approach their seniors because they're quiet like me.
Once I start drinking I can't really control myself. I drink till three or four in the morning on average and I talk a bit more when I'm drinking. I'll say three words instead of saying just one. But even after I've talked with someone a lot over drinks one night, I'll become quiet all over again when I meet them sober and in complete daylight. Even when I'm really close with them! (laugh) I only have quiet people around me.
There are times when I act unpredictably. For example, there was a day when in the middle of having a drink with my acquaintances, I felt the sudden urge to go hiking. And I really went. I was almost sober as well because I hadn't had that much to drink. My close friends tell me, "Are you crazy?" everytime I act like that.
I like watching movies regardless of genre. I'm not picky -- I can watch art films, action films, comic films and thrillers. I recently watched a movie called "Triangle" and in a way, it could seem very boring but it made me look back on myself. There's a line that says something like, 'You will continuously be punished if you sin,' which actually means something deep. So I watch scenes like those over and over again, whether it be ten or twenty times.
I think acting gets increasingly difficult with time. I used to act out my lines easily in the past but these days, I dig deeper into them, wondering why certain things will be said and trying to imagine the emotions my character would feel. This is what I do to find what's best. And of course, I do it alone.
If there was an ability I could have equipped on me as an actor, it would be the ability to absorb myself 100 percent into my role. I'd like people to say, 'I saw this actor in this film and he embraced his character completely. And then I saw him in another movie but he was a completely different person.'
I think I won't be able to wear a school uniform soon so I'd like to appear in a young romantic drama soon. You know, where a uniform in a scene where I reminisce on my past as a teenager. (laugh)