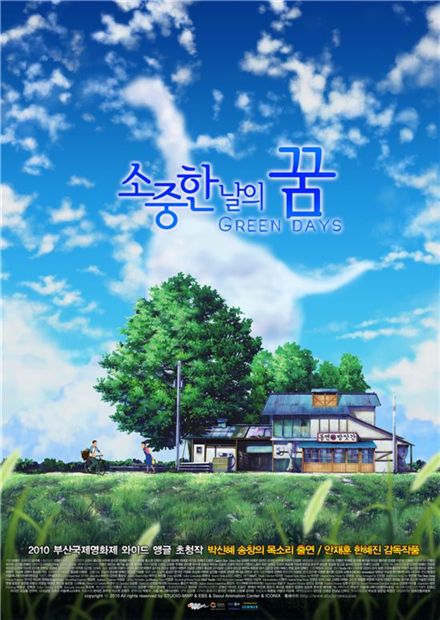 썝蹂몃낫湲 븘씠肄
A Korean animation film featuring the voices of actors Park Shin-hye and Song Chang-eui will open in theaters next month, according to the film's promoter Studio-MWP on Wednesday.

The movie, titled "Green Days" which opens in theaters on June 16, tells the first love story of a young girl named E-rang (voiced by Park) who meets a boy named Chul-su (voiced by Song) who dreams of becoming an astronaut. The flick took about 11 years to make with a total of 100,000 frames drawn. Last year, "Green Days" was invited to be screened at the London Korean Film Festival and earned praise for being a movie that "has the appeal which will be well-received in Korea and in other countries." It will also be shown at the Annecy Animation Festival which will run in Paris from June 6 to 11 this year.

Park became a household name in Korea after appearing in hit TV series "Stairway to Heaven" (SBS, 2003) and rose to stardom in Asia through SBS' hit drama "He's Beautiful." She is currently working on new MBC romance drama titled "You Have Fallen For Me (translated title)” which is scheduled to air on June 29.

Song made his debut in 2002 through the musical "Blue Saigon" and has appeared in several dramas after shooting to stardom through TV series "Golden Bride" (SBS, 2007). He recently appeared in the musical "Gwanghwamun Love Song" alongside BEAST member Yang Yo-seop. ※ Any copying, republication or redistribution of 10Asia's content is expressly prohibited without prior consent of 10Asia. Copyright infringement is subject to criminal and civil penalties.