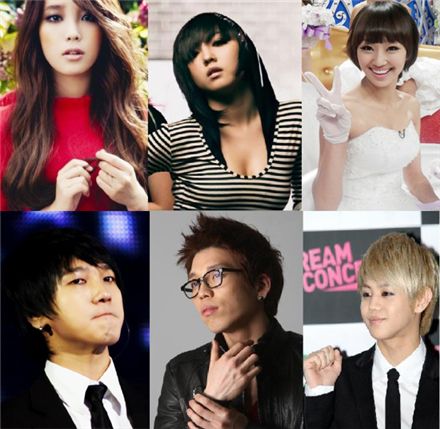 Some of the hottest names in the K-pop industry including SHINee's Jonghyun, 2PM's Junsu, CNBLUE's Jung Yong-hwa and FTIsland Lee Hong-ki have been cast in a televised singing show.

Kwon Jae-young, the producer for KBS TV program named "Monumental Song 2" (translated title), told 10Asia on Friday that the aforementioned idols had been set to join the show a long time ago although they will not be able to participate from episode one due to their schedules.

Other singers that will appear in the competition are 2AM's Changmin, Sistar's Hyo-rin, BEAST's Yoseop, miss A's Min, Super Junior's Yesung, and IU.

On the program, a total of six idol singers will invite a legendary singer whose songs they will sing their own adaptations of and be judged for them.

"As of now, SHINee's Jonghyun is set to appear in the third episode with the second legend and 2PM's Junsu with the third legend in the fifth episode but this hasn't been set because we don't drop anyone from the show," Kwon explained. Therefore a new singer will join when one leaves for personal reasons or his or her schedule and producers are also considering implementing an honorary leave system where a singer with three wins naturally leaves the show, Kwon further explained.

The first episode for the show will be recorded on May 16 and is set to go on air around early June.