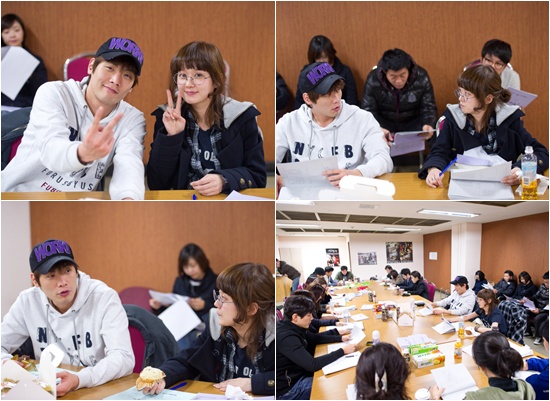 The main cast of an upcoming KBS series whose working title is "Baby Faced Beauty" has held their first script reading session, according to the show's promoter EM.COM on Tuesday.

"The atmosphere is usually full of tension and the actors are nervous for first scripts reads but it was quite different this time since the actors created a harmonious environment and showed great acting skills," a producer from the show was quoted as saying.

"Baby Faced Beauty," helmed by directors Lee Jin-seo and Lee So-yeon, tells of 34-year-old Lee So-young (played by Jang) who lies about her age and begins working at a textile company and meets Choi Jin-wook (played by Choi) who falls in love with her.

The show will hit the airwaves every Monday and Tuesday nights starting May 2 after current series "Detectives in Trouble" ends its run. Jang, who will be making her local small screen return after six years, made her debut in 2001 as a singer, releasing a number of hit albums and songs such as "Sweet Dream" and "April Story." She expanded her career into acting with roles in the popular sitcom "Non Stop 2" (MBC, 2001) and "Successful Story of a Bright Girl" (SBS, 2002).