2NE1 to perform on televised music programs every week 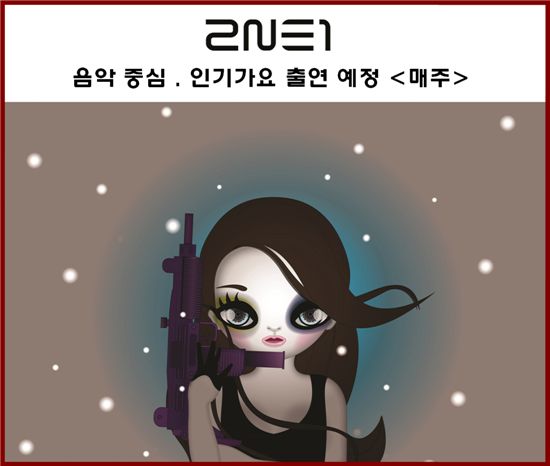 Korean girl group 2NE1 is scheduled to perform on televised music programs every week starting with MBC's "Music Central" this weekend, according to their agency YG Entertainment's official blog.

The blog unveiled a cartoon image of 2NE1 member Sandara Park with the phrase "2NE1 scheduled to be on 'Music Central' and 'Inkigayo' every week," indicating that the girls will promote new song “The Coolest” on the aforementioned music programs.

A PR official from YG confirmed with 10Asia over the phone today that the girls' appearance on the shows and explained that they will "probably promote their latest song on the music programs till the release of their mini-album next month."

The quartet will reveal their new album containing "Don't Cry," "Lonely," "The Coolest" and two or three new tracks on July 21.

2NE1, formed of other members Park Bom, CL and Minzy, have taken over online real-time music charts with "The Coolest" upon its release last Thursday and have received over 1.6 million hits of its official music video. ※ Any copying, republication or redistribution of 10Asia's content is expressly prohibited without prior consent of 10Asia. Copyright infringement is subject to criminal and civil penalties.