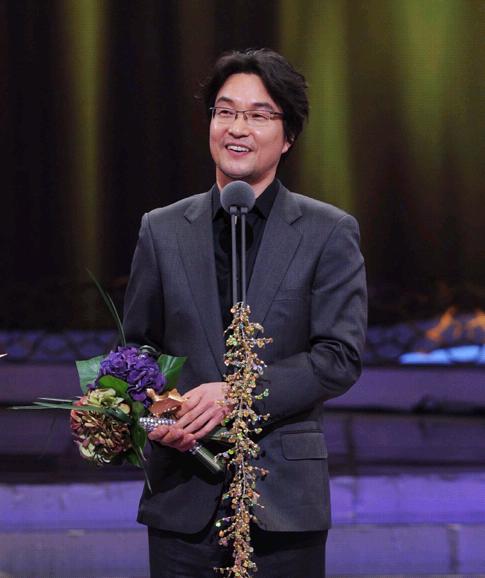 썝蹂몃낫湲 븘씠肄
Actor Han Suk-kyu proved himself worthy of his reputation as one of Korea's best actors by taking the top prize of SBS' annual drama awards with his first small screen project in 16 years.

Han, who had turned his attention to movies after MBC's 1995 TV series "Hotel," took the Grand Prize of the 2011 SBS Drama Awards held in Seoul on Saturday for his role as King Sejong in historical drama "Deep Rooted Tree." "Tree" had garnered much positive response throughout its two and a half month-long run, staying the most-watched Wednesday and Thursday night primetime series for 11 weeks, as well as winning Han much critical appraise.

"I thank my parents. They have blessed me with everything including my voice and my state of consciousness," the 47-year-old actor said in his acceptance speech. He also took the Teenage Star Prize, based on results from a popularity poll on teenagers.

The series revolving around how King Sejong creates the 'Hangul,' or Korean language, also took the trophies for best series, producer award and excellent actress in the category of drama specials. ▶List of Winners for 2011 SBS Drama Awards ◀