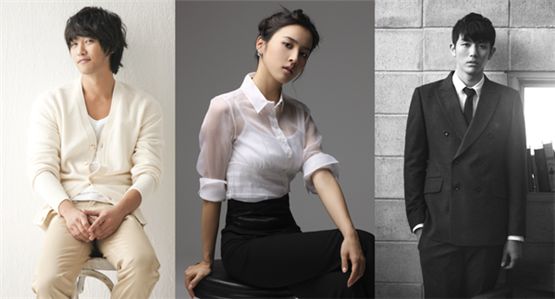 Korean ballad group 2AM's Seulong, actress Han Hye-jin and actor Jin Goo have signed on to star in a political film based on the webtoon by Kang Full.

The three stars' respective agencies all confirmed with 10Asia in telephone interviews that they will play in the forthcoming movie titled "26 Years," scheduled to crank in on July 3.

In the film adaptation begins the story from the 1980s when thousands of people--mostly composed of college students--were killed or wounded by the South Korean government due to pro-democracy movement in the city of Gwangju on May 18, 1980.

In the film that deals one of the critical events in Korean history, Seulong will play a young policeman whose life gets highly influenced by the incident and Jin Goo will portray a gangster from an organized criminal group whose dad gets killed during the massacre.

Meanwhile, Han, who will be making her big screen return in two years since "No Mercy," will play a professional shooter from the national shooting team. The three characters, who consider themselves as some of the biggest victims of the movement, plot a top-secret project to punish the person in charge of the massacre.

The incident showed how the country was brutally suppressed and Kang Full's web comic put emphasis on the overcoming of inter-personal and societal barriers.

The film was originally set to star actress Kim Ah-joong and Ryoo Seung-beom under the title "29 Years" in 2008, but the production came to halt once investors pulled out from funding the film due to external issues.