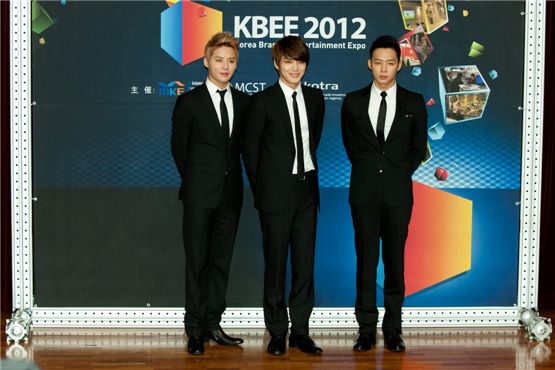 According to press releases of JYJ's agency C-Jes Entertainment and SM on Wednesday, the group and SM reached an agreement to terminate all the contracts signed between the two parties and not to interfere with each other's future activities.

“We made a judgment that we don’t have to manage the three members of JYJ any longer as they expressed their intention not to keep their activity as TVXQ!,” an official from SM was quoted as saying.

“We came to the conclusion ending this litigation would be the best way to protect U-Know Yunho and Max Changmin, who are still actively working as TVXQ!, from any additional or unnecessary damages.”

In the meantime, Baek Chang-joo, C-JeS Entertainment C.E.O, said in the statement that the past conflict would be a milestone to eliminate any unfair contracts between agencies and artists. JYJ members, Kim Junsu, Kim Jae-joong and Park Yuchun, debuted in 2004 as members of quintet TVXQ! of SM Entertainment. However, the three dropped out of the group and formed a new group named JYJ, asserting the 13-year long exclusive contract they had with SM was disadvantageous towards the artists.

Thanks to the reconcile announcement this morning, JYJ and TVXQ! can now concentrate on their future activities, several Korea's media outlets forecasted.