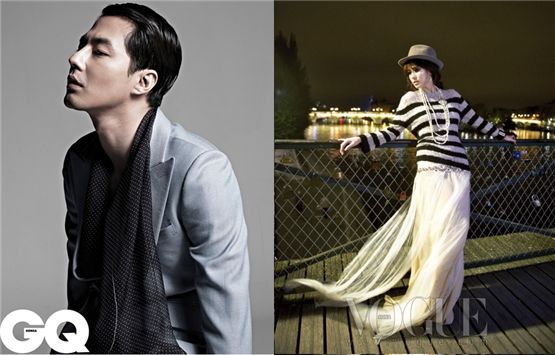 Zo and Song are eyeing Noh’s next project, “That Winter, The Wind Blows” (tentative title), officials with the two stars’ agencies told the magazine Thursday. Following previous reports that top Korean actor Won Bin will take on the project, Zo and Song are currently in discussions with its production company, the reps explained.

Aiming to hit airwaves early next year, “That Winter, The Wind Blows” is a remake of the 2002 Japanese drama “I Don’t Need Any Love, Summer” (translated title), starring actress Hirosue Ryoko.

The aforementioned has also been remade into a local movie in 2006, titled “Love Me Not,” starring actor Kim Ju-hyeok and actress Moon Geun-young. The new version will be helmed by director-writer duo Kim Kyu-tae and Noh Hee-kyong, who have worked together in JTBC’s popular TV series "Padam Padam" (2011-2012), starring Jung Woo-sung and Han Ji-min.

Zo made his debut as a model in 1998 and gained increasing popularity after starring in hit drama “What Happened in Bali (SBS, 2004)" co-starring actress Ha Ji-won and actor So Ji-sub.

Since his return to the business after fulfilling his mandatory military service in May last year, Zo has shot several commercials and guest starred on TV variety shows.

Song appeared in a series of dramas and sitcoms since her debut 1996 and shot to super stardom after starring in hit KBS TV series "Autumn Fairy Tale" (KBS, 2000) opposite Hallyu stars Won Bin and Song Seung-heon.

She's popularity in Asia grew after starring in several successful TV series including "All In" (SBS, 2003), opposite Lee Byung-hun and "Full House" (KBS, 2004) alongside Asian pop sensation Rain.