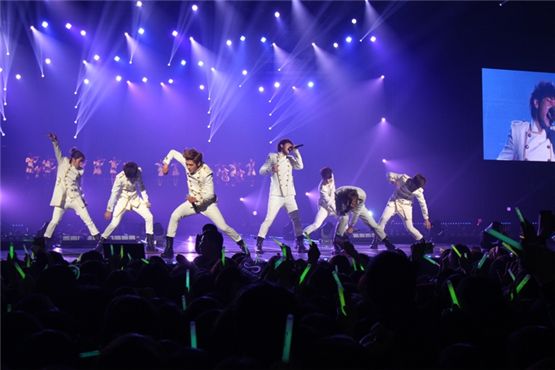 Korean boy band INFINITE has announced that they will launch their encore concert “Second Invasion - Evolution” in two months time.

After successfully pulling off their first series of concerts on January 11 and 12, INFINITE is set to hold another round of their concert at the Olympic Stadium on April 1.

"We decided on the encore concert and various special events for those fans who were unable to attend the first concerts," an official from CJ E&M told 10Asia on Tuesday, adding that the overall theme of the concert and the number of tickets to go on sale will remain the same.

The idol group sold out all 18,000 tickets for their first concert "Second Invasion" in just ten minutes of going on sale last month.

INFINITE, consisted of Sung-kyu, Woo-hyun, Dong-woo, L, Hoya, Sung-yeol and Sung-jong, sang tracks from their full-length and single albums at this month's concert, including their popular hits “Be Mine” and “Lately.” All seven members are currently preparing for their Japan leg of their concert, which will kick off for two days starting Saturday.