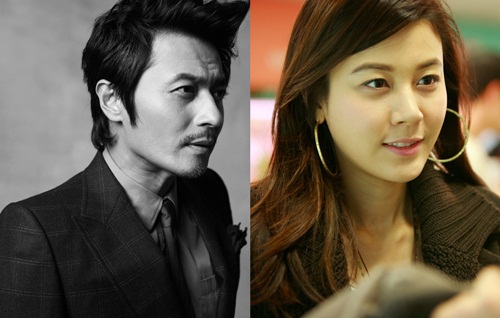 Top Korean actor Jang Dong-gun and actress Kim Ha-neul have been cast as the leads in an upcoming SBS TV series, according to the show's promoter 3HW on Wednesday.

3HW stated in a press release that Jang will play Kim Do-jin who is a manager of a construction company and Kim will take on the role of a high school ethics teacher named Song Yi-soo in the romantic comedy titled "Dignity of a Gentleman" (translated title) set to premiere in May.

"I have high expectations for 'Gentleman' and I am really glad that I was able to take on this role even with my busy schedule in China," Jang said in the statement.

His co-star Kim explained that she was excited to be working on a drama written by Kim Eun-sook once again since she wrote the script for her last SBS TV series "On Air." Jang's last small screen role was in MBC's drama "All About Eve" in 2000 which also starred actress Chae-rim, Han Jae-seok and Kim So-yeon.

Kim has enjoyed steady popularity in Korea since her debut in 1996, starring in numerous hit TV dramas and movies, including SBS TV series "On Air" and films "My Tutor Friend," "My Girlfriend is an Agent" and "Blind."

She was recently in Japan to promote her film "You Are My Pet" with co-star Jang Keun-suk.