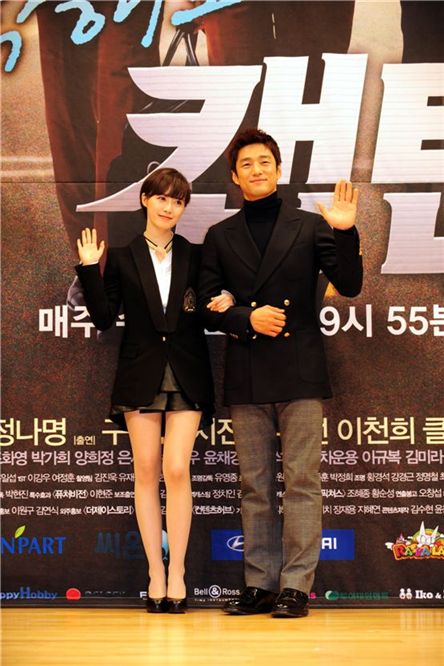 Actress Ku Hye-sun says she had presumed that controlling an airplane would be as easy as driving a car.

Ku made the remark at a press conference held in Seoul on Tuesday while talking to reporters on learning how to fly airplanes for her upcoming TV series "Take Care of Us Captain."

"We learned how to control the airplanes on an actual simulation course which is almost identical to the one used by the pilots of Asiana Airlines which I thought would be as easy as driving a car but I came to respect pilots after trying it out,” Ku explained.

She then added that she used to have some fear of flying but the experience taught her that airplanes are actually very safe.

However, when asked whether she actually flew a plane for the show, Ku responded, "I didn't although it will look like I did because the actual pilot controlled the plane from behind me." To that, her co-star actor Ji Jin-hee, who plays captain Kim Yoon-sung said, "In my case the pilot asked if I wanted to try flying the plane during one of our shoots in Australia and I felt that it was easier than the simulation course."

Set to air every Wednesday and Thursday night starting tomorrow, "Captain" will tell the story of Ha Da-jin (Ku) who overcomes her personal hardships in order to become the captain of an airline with the help of her colleagues and flight attendants.