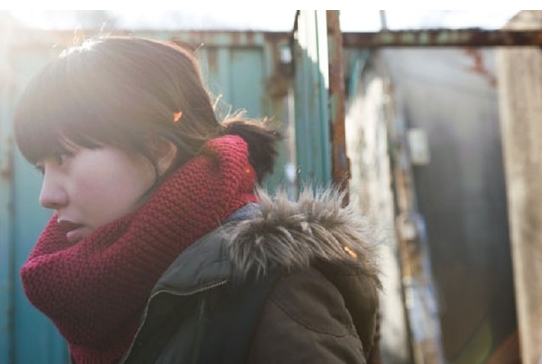 Hye-hwa, (played by You Da-in) who became a single mother at the young age of 18, was a girl with a strong spirit. Anticipating the joy of becoming a mother, she feared nothing even as she dropped out of school to learn to become a hairdresser. But when the child’s father Han-soo (Yoo Yeon-seok) runs off like a coward, she comes to harbor a secret that she cannot tell anyone, a pain she wishes to hide from everyone. From then on, Hye-hwa is stuck, unable to move in any direction whether it be east, west, north or south. Then winter arrives and so does Han-soo who shows up five years later to tell her the news of their child whom she thought was dead all along.

Anticipation Quotient: 8
Why was it so hard to come back to you

Film “Re-encounter,” which is set to premiere on February 17 is a story about things that have been abandoned. An abandoned dog comes to hide in an abandoned house followed by an abandoned person. “Why won’t you bite anything?” Some types of grief are so grave that they cannot easily be spoken of nor be asked about. Just like the remains of clipped fingernails secretly gathered inside an empty film canister, most of one's pains in life gets accumulated in a dark room without anyone being aware of it. But just like those fingernails that continue to exist somewhere inside the house, the fingernails stay there, as if a final signal of hope that the pain will get discovered someday -- pointing out that one is not okay just because it is not said aloud in words and still very much alive even if it seems dead. But rather than immersing itself into shedding a sympathetic light on abandoned presences, “Re-encounter” turns its eyes to people on the other side. “How can there be a person who isn’t afraid of anything?” There are moments -- when you believe that you were the only one that suffered, times you felt everyone turned their back on you. But during the time you thought you shivered in fear all by yourself, there were people on the other side who also suffered an equal amount of pain. Those who left experienced their own share of pain that is equal to the amount of happy times they spent together. The one who left rather may be the one that was left behind.

Unlike the image actress You Da-in gave off from a canned coffee commercial where she shyly approached the guy she secretly admires with sly comments, You in her latest role as Hye-hwa dons a nonchalant expression which shows how she suffered from loss and recovered from it over a period of five years. Also, Yoo Yeong-seok's face which contains both the vibrancy of youth as well as its futileness, resembles actor Yoo Ji-tae as a youth in his first movie “Bye June” (1998). There are daughters who spend the rest of their lives without knowing who their birth mothers are. Finding hope in the remainder of the life of this unfortunate woman whose fate may have been passed down by generations, may rather be the moment she is switching her gears to reverse to return to the past that she has tried so hard to ignore. Why was it so hard to go back to you? The past that one re-visits after overcoming the pain is no longer considered a withdrawal. It is a small yet big step forward, much more positive than a future glamorized with vague hopes.