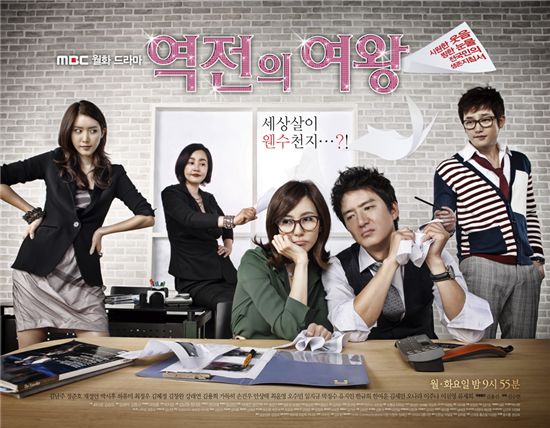 MBC's Monday and Tuesday prime time series "Queen of Reversals" has been extended by 10 episodes, according to the major broadcaster.

MBC announced through a press release Friday that the show, the sequel to last year's hit series "Queen of Housewives," will show a total of 30 episodes instead of the original 20, to end its run in late January instead of this week. "The writer said there is still much to be developed regarding the story and the cast, agreeing with the writer and grateful for viewers' support for the show, also decided to prolong the show," producers were quoted as saying in the press release.

In "Reversals," about a woman trying to balance work and married life, has seen its popularity improve steadily since its premiere in mid October to post ratings in the mid 10-percent range last week.

Actress Kim Nam-joo reprises her role from "Housewives" as the very determined, go-getter type housewife while actors Jung Jun-ho, Park Si-hoo and Chae Jung-an form the rest of the cast. A historical drama titled "Jiakpae," translated into "Mate," is set to go on air starting February, after "Reversals" ends its run.

The show, set to star actress Han Ji-hye and actor Chun Jung-myung, will tell of the story of two boys during the Joseon era (1392-1910) whose identities get swapped.