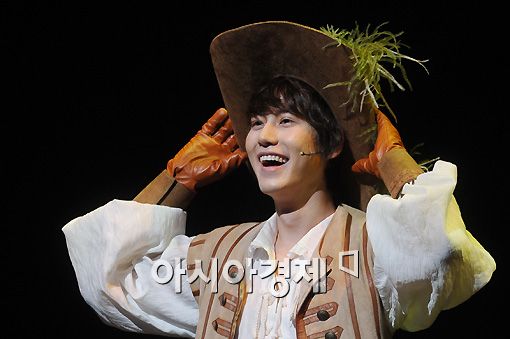 Super Junior Kyuhyun acts a scene from musical "The Three Musketeers" at a press call for the show held at the Chungmu Art Hall in Seoul, South Korea on December 16, 2010. [Lee Ki-bum/Asia Economic Daily]

Korean boy band Super Junior member Kyuhyun has said that the advice he receives from senior musical actors is giving him the strength to play his role in the musical version of "The Three Musketeers."

The remark came on Thursday during a press call for "The Three Musketeers" as he spoke to reporters at the Chungmu Art Hall in Seoul about being part of the musical. "I have yet to give my first performance but I have improved my acting skills after receiving a lot of advice from senior actors after the rehearsals," Kyuhyun said.

He then added he was joking when he previous said he gets scolded when he makes mistakes, particularly by musical actor Kim Beom-rae.

"I was only trying to say that the other actors treat my very well in a humorous way but I think the fans took it the wrong way. Kim and the senior actors are very nice to me and give me guidance," Kyuhyun explained. Kim is said to have been attacked by fans of Super Junior after Kyuhyun made the previous comment. "Super Junior's fans are scary," Kim jokingly said.

"The Three Musketeers," a novel written by Alexandre Dumas, recounts the adventures of a young man named d'Artagnan after he leaves home to become a guard of the musketeers alongside his friends Athos, Porthos and Aramis.

In mid-October, Kyuhyun and TRAX vocalist Jay were cast to rotate the role of character d'Artagnan while The Grace member DANA will play Constance Bonacieux, the main female character who is d'Artagnan's first love.

The musical began its run on Wednesday and will end on January 30 of next year. 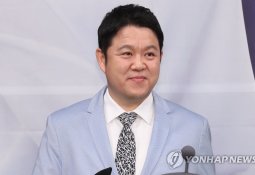