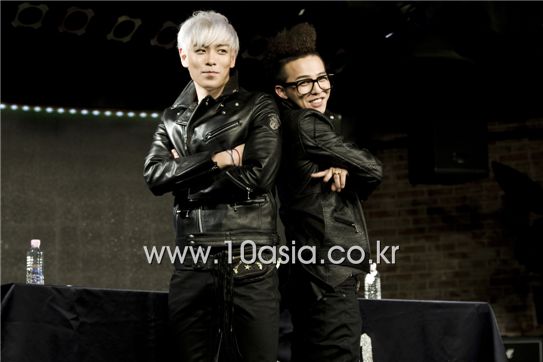 A world premiere which went on air live through YouTube. This may sound somewhat grandiose but the stage that G-Dragon (GD) and T.O.P of boy band Big Bang stepped on ahead of releasing their album as a unit was small and simple. Instead, they revealed snippets of each song listed in the album and explained the background to them.

To the fans who were looking forward to a fancy comeback performance, this showcase in the format of a talk show may have come off as long-winded but their choice rather came off as the best method to express their affection for the album. And like the two said, them having worked on each of the songs will be like a welcome rain to fans who have long waited for Big Bang's comeback to the local music scene.

Below are excerpts from their showcase held in Seoul on Tuesday, ten days ahead of the release of "GD & T.O.P."


Q: The fact that you are using the same logo in promoting your album and in the accessories you wear stands out. Does it have any particular meaning?
GD: As you can see, it's in the shape of a hand making the sign of a 'v.' While working on the album, T.O.P and I figured that our fans like it the most when they see us having a good time on stage. The mark is a bit similar to the Playboy logo as well but it means that two guys, who can be various types of men including attractive, sexy, and knowing how to have fun, have come out.

Q: T.O.P, your solo song "Turn it up" is listed as a bonus track in this album. Is this because you don't plan to release solo albums anymore?
T.O.P: I think I should explain how the two of us came to release this album to answer that question. Ji-yong [G-Dragon] had been working on Big Bang's album and after I finished working on my movie, we came to spend more time working together and making more and more songs that our agency didn't think were too bad. So we abruptly decided to put everything together in the form of a project album and present it as a gift to our fans who are waiting for Big Bang's album. Our CEO was the one who suggested us the idea of putting together an album containing songs the two of us have made and also including songs that one day will be released in our solo albums as the bonus tracks.

"We want to tell more stories as rappers." 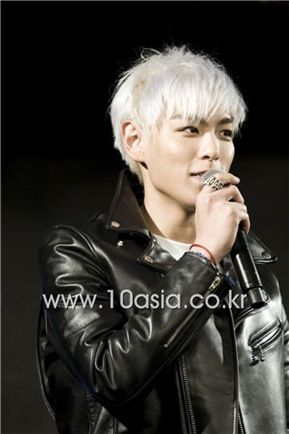 Q: So was the reason that you two came together purely because your CEO suggested it?
GD: We thought of a variety of combinations while working on Big Bang's album. And we felt that we should show something new and different to us in the new album we would release since we hadn't been with our fans for the past two years. So we tried putting together different combinations such as me with T.O.P, just the vocalists which would exclude us two, me and Seungri, Daesung and T.O.P but T.O.P and I saw the most results together. Our fans also liked the what we worked on so that's how we came to release an album like this.

Q: Were there any difficulties you two experienced while working together?
GD: There weren't any difficulties in particular because we're like family. It's rather the remaining three members who pressure us a lot. They tell us, "You have to do well. That's the only way we'll all do well." I think we'll have to work even harder.

Q: It seems to be YG's trend these days but why did you set three songs as the title tracks?
GD: It's probably why 2NE1 did it as well but we wanted to show a variety of performances since we're making a comeback for the first time in a while.

Q: But don't you not have enough time to promote all three songs?
T.O.P: We tend not to set constraints when it comes to time. But we consider both this album and Seungri's upcoming album just part of the process to releasing Big Bang's album. Our goal is to show our fans as much as we can in the shortest time possible.

Q: What’s the difference between Big Bang’s album and the album you two will release?
T.O.P: Like most of you can probably tell, we’re two very different people so when put together, we probably created a new type of music. We’re excited about the upcoming performances and fashion we’ll get to stage -- we’re preparing a lot of things.
GD: I think our songs will be closer to hip-hop than when we’re Big Bang. And we’re both rappers so we’d like to tell more stories for our fans to listen.

Q: You made a lot of the songs yourselves but out of the three title tracks, two of them are by Teddy. That’s why it seems like the album will somewhat be a continuation of the vibe we get from Big Bang’s. Is there a reason you made such a choice?
GD: Teddy is our big brother who always tells us a lot of things. That’s probably why there’s the Big Bang-Teddy combination and the 2NE1-Teddy combination and hence, we wanted to show fans the GD-T.O.P-Teddy combination. So the music may come off as being similar to that of Big Bang’s but we made much more diverse attempts as in terms of how the music develops and the images that the melody and rap portray. I’m hoping fans will feel it as well after listening to our songs.

"We will focus on our local activities from now on." 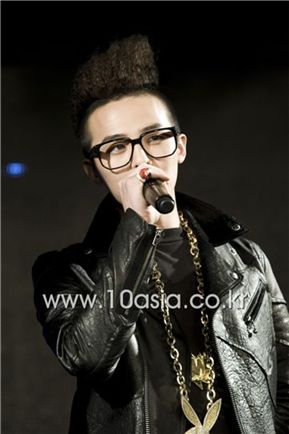 Q: Is there any song you’re particularly attached to other than the title tracks?
T.O.P: We worked on each and every one of the songs in this album by staying up many nights. That’s why I’m attached to all of them. There’s a different vibe to every song and we worked hard on all of them so I would like to say that the entire album is meaningful.
GD: And this album contains many genres. R&B-like rap, acoustic rap, there are strong hip-hop numbers and electronic sounds as well. The reason we mixed such a variety of genres is because we wanted to bring out more of our character that we don’t get to show when we’re Big Bang. We thought hard on how T.O.P and I could create synergy.

Q: Do you have plans to appear on television for programs other than music shows?
GD: We’ve always wanted to but you can probably tell that we’re not good at talking. We still get intimidated when we’re surrounded by a lot of people. We can fly around on stage but I still get scared and nervous of these type of occasions. However, as much as this album is important to us, we plan to make appearances whether they be on variety shows or radio shows so I’m hoping our fans are looking forward to it.

Q: And how are the other members of your group doing? They must be recording Big Bang’s album.
T.O.P: A part of us still wants to be secretive about our concept for Big Bang’s upcoming album. We’re all under the determination that we’re going to pour out the energy we’ve saved up on so you can look forward to it.
GD: Daesung is busy shooting a drama and I met Seungri yesterday who seemed pumped working on his solo album. We heard that Seungri is working even harder now that we’re going to come out with a new album and we in turn are stimulated as well when we see how hard Seungri works. Taeyang is taking a break after having promoted is solo album.

Q: You unveiled a music video today. Will music videos be made for all three title tracks?
GD: We’d like to be able to if we have time. We plan to start working on one of them.

Q: Big Bang pursues a singing career in Asia as well. Do you two plan to promote yourselves overseas as well as your duo unit?
GD: I think we haven’t been attentive to our career in Korea over the past two years so from now on, we plan on showing our fans various sides to us by focusing on our local activities.