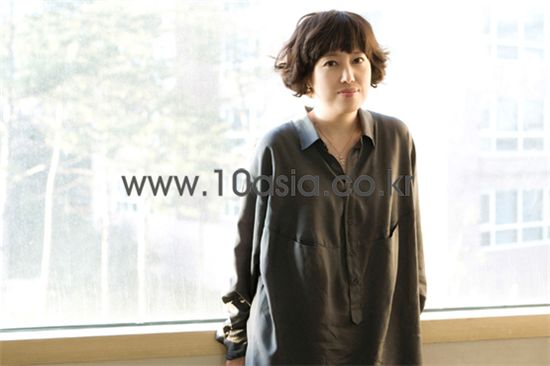 KBS TV series “SungKyunKwan Scandal” finished its run on November 2. In the story set in late 18th century Joseon, a girl named Kim Yoon-hee (Park Min-young) entered the royal academy of SungKyunKwan disguised as a boy where she learned that true learning heads toward people and that they are the very foundation of the country. King Jeongjo (Jo Seong-ha) too tells her, “Now it’s your turn to dream of a new future for Joseon.” Trying to describe the ideals young people have is not easy. One wrong step and it can sound like an empty slogan or childish passion. That was not the case for Kim Tae-hee though, the script writer of drama "SungKyunKwan Scandal" who pulled it off by adding modernity and refreshing new scenes to the already charming SungKyungKwan story based on the book “The Days of SungKyunKwan Students.” 10 Asia interviewed Kim just few hours before the drama wrapped up.

10: “SungkyunKwan Scandal” was seen in various lights. Some saw it as an up-and-coming story, some as a historical political drama and others simply as melodrama. How did you decide on the direction of the story?
Kim Tae-hee: Before getting into the synopsis I had a lot of fun watching the SBS drama “Brilliant Legacy.” The series contained a lot of genres; family drama, mystery, romantic comedy and professionals. I believe there will come a day when a drama must encompass more than one genre to keep it going. I was also advised that dramas on young romance will no longer work so I wrote the synopsis quite ambitiously but writing the actual script became much tougher to do than I thought. (laugh) It was difficult setting the tone in the story and I heard that our TV director also thought a lot about what the genre of this drama should be.

10: Before the series premiered, everyone thought it would be another romance story only set back in 18th century SungKyunKwan. But what this drama did was delve deeply into the basic principles of politics. You did the same thing with your other history drama KBS “King Sejong (2008)” that you wrote jointly with another script writer Yoon Sun-joo. The drama was closer to a political drama than the epic of the great King Sejong. Are you interested more in such aspects?
Kim Tae-hee: To be honest I really had hard time following the story line that continued to deal with political agendas in "King Sejong." Everybody knows about the creation of Hangeul (Korean characters) but the drama even looked into complicated issues like tax reform at the time. It was so difficult that at the time I thought hell will freeze if I do another drama that combines history and politics. But when I was assigned with this drama I realized SungKyunKwan itself was a place where students learn about politics. I couldn’t just let my characters sit and memorize teachings of Confucius absentmindely all day. I had to bring out a theme based on what SungKyunKwan offered.

10: It was quite interesting to see how you showed the various school functions and exams of 18th century academy in order. Was there a reason for that?
Kim Tae-hee: I like it when a drama brings into light, things that were little known in the past. Because this drama centers on a space called SungKyunKwan, I wanted to show it to the audience properly. The original book also gives a detailed description of school customs for newcomers to SungKyunKwan so I wanted to do a good job of portraying that as well. That’s how I came to include things like the school's archery competition, golden tangerine exam and weekly test in the episodes. The original synopsis had also included the school's ancestral ritual and graduation ceremony,

10: In handling the matters of politics your approach was somewhat abstract, combining it with a learning process that encouraged thinking deeply about making a logical discussion and improving an existing system or ideology. The process of making Yoon-hee change the mindset of Geol-oh (Yu Ah-in) and Jeong Yak-yong (Ahn Nae-sang) must have been quite a challenge. Why did you choose to go the hard way?
Kim Tae-hee: Maybe because I knew no other way to go about it. (laugh). I gave much thought to exactly how the students at SungKyunKwan learnt their ways long time ago. I wanted to show the process of things such as what they talked about in their first class to the viewers at least once, in accordance with SungKyunKwan's curriculum. In the case of Yoon-hee, I needed to strengthen her motivation to stick around SungKyunKwan and become interested in politics for people. What Yoon-hee said to her senior Geol-oh and her teacher Jeong Yak-yong stemmed from these thoughts as well. I was curious to how the so-called “elite” class will respond to the thoughts of someone from a poor, underprivileged background and a girl, nonetheless.

10: Most stories that have a girl disguised as boy accompany fantasy of her surrounded by cool guys and winning quite a few hearts. SungKyunKwan Scandal was interesting in sense that Yoon-hee viewed the world through her unique standpoint as a woman. Only Yoon-hee could give out such unique reaction in her first encounter with courtesan Cho-sun (Kim Min-seo) because she was a woman, too.
Kim Tae-hee: I was actually worried that feminism told in the eyes of Yoon-hee might come off as being cliche. I went to college in 1992, when I had much thoughts on womens' issues, so I was worried I'd be voicing my opinions too late. I think I could have voiced myself better through Yoon-hee if this has been written much earlier, around the year 2000.

10: What did you major in college?
Kim Tae-hee: I majored in media and mass communications. I loved TV dramas so much that I can still remember the details of the stories I watched 30 years ago. But I thought a good writing is possible only at a later age like forty so I took my time, working at a small broadcast in company. Only after getting married did I decide to indulge myself fully on script writing. I thought I should give it a shot come hell or high water because it’s something I have always wanted to do.

10: And what was your college life like?
Kim Tae-hee: I was ordinary as an undergrad student who entered college in 1992 but maybe not so compared to college students these days (laugh). But the reason I incorporated politics into the story is not because I had any firsthand experience but in trying to fill in the story according to the setting in the original story. I’m not the so-called 386 generation (born in the 60s, undergrad in 80s and largely characterized as active in political movements). They were my seniors. While writing the script I thought of King Jeongjo and subject Jeong Yak-yong as being the 386 generation, not the “Jalgeum Foursome” composed of Yoon-hee and her three friends. I had no intention of sending out messages that we should stand up and rise. But I heard that part of the reason this drama attracted women in their 30s and 40s was because something in the drama triggered their nostalgia. Whether they were active members of students’ protests or not, they all went through the time when they wanted to change the world.

10: Then how did you view King Jeongjo who perceived “Jalgeum Foursome” as his political heirs?
Kim Tae-hee: From what I gather, King Jeongjo in real life seemed to be quite a prudent person who knew how to turn situations around. He did mention he will open an era of great reconciliation between parties as I quoted in the script and it is also true that he wanted to put an end to the slave system. He had many bold ideas in those days and amazingly, the public slave system did come to an end during the era of his son, King Soonjo. But he also had limitations to thinking as only he, as the king, could make things happen. I thought such double standards is what the existing generation, including me, have within, leaving our younger generation in their 20s quite frustrated. I thought that must be what the students at SungKyunKwan might feel and probably have lots to say to King Jeongjo and their teacher Jeong Yak-yong. That emerges a little in the final episode. I still wonder what the drama would have been like if I went deeper into that subject.

10: Jalgeum Foursome all had strong characters of their own in the original story. So did the drama even though there was a bit of change in the character. How did you draw up the character?
Kim Tae-hee: These days I feel sympathy toward the 20s. Although I had my share of rough times I believe the 20s in this era is going through worse. I felt sorry that they may not even know that. That is why I had Yoon-hee as hopeless to the point of blurting out “I don’t think the country I live in is that great,” in the first episode. By showing how Yoon-hee recovers her hope in a space called SungKyunKwan I wanted the twenties to identify with her feelings. Then I placed Sun-joon, Yoon-hee’s soon-to-be love interest and a guy who believes it all depends on individual effort, at the opposite standpoint of Yoon-hee to better portray her change of heart. Actually my favorite part in the original book was when Sun-joon got all jealous over Cho-sun. I thought the conflict will become most obvious when such character of propriety and order fall for homosexual love. By the way the most charming character in the book was Geol-oh but I don’t think I’m cut out exactly for portraying such raw and rough male character (laugh). That’s how my Geol-oh is more sensitive and less in words compared to other characters. This combined with additional interpretation of actor Yoo Ah-in who happens to be a very sentimental actor, the Geol-oh in the drama became someone completely different from the original story. The reason I made Gu Yong-ha (Song Joong-ki) as a middle class man instead of a noble is because I wanted to show how SungKyunKwan embraces people of all class. That’s who Jalgeum foursome came to be, by bringing together a son of the ruling party Noron, a son of the opposition party Soron and son of a middle class and a woman.