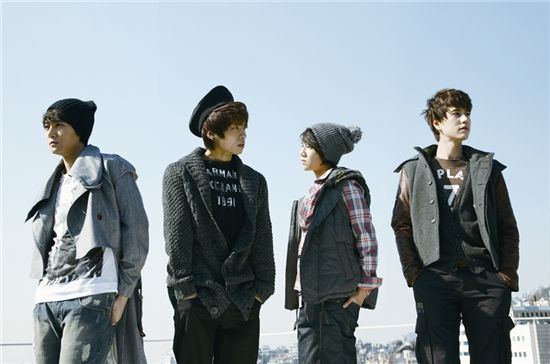 SM announced in a press release on Friday that the four singers have come together to form a project group named S.M. The Ballad, and will release their first full-length album, whose title is translated into "Longing For You," on November 26.

The agency added that the ballad project will feature collaborations with various singers.

Jay is the leader and main vocal of the duo TRAX (Typhoon of the Rose Attack on Xmas). They were formed in the summer of 2004 by SM and by X Japan's co-founder Yoshiki. Outside of his singing career, Jay has starred in musicals such as "Hey Bro?" and recently in "Rock of Ages."

Kyuhyun is one of the four lead vocalists of 13-member boy band Super Junior and also part of the sub-group Super Junior-M. He also released his first solo single "Listen To You" and will be starring in the upcoming musical "The Three Musketeers." Jonghyun made his debut as the lead singer in SHINee in 2008. They are known as one of the most popular groups in Korea and Asia with their hits "Replay," "Ring Ding Dong" and "LUCIFER."

Jino, 18, has trained with SM Entertainment for two years and will be making his singing debut through S.M. The Ballad.