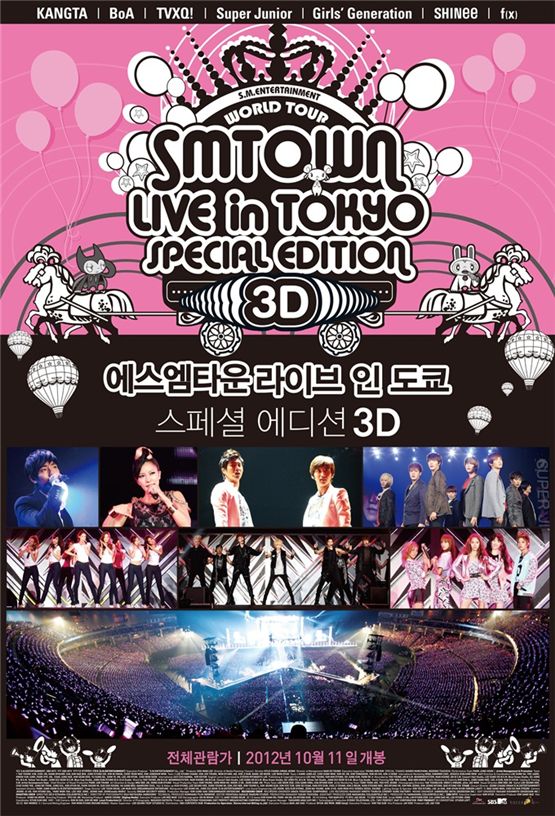 Official poster of "SMTOWN LIVE IN TOKYO SPECIAL EDITION 3D," which will open in theaters on October 11, 2012. [SBS MTV]

Fans of Super Junior, TVXQ!, Girls' Generation, who were not able to secure tickets to SM Entertainment artists' joint concert in Japan will still be able to watch the event at their local movie theaters.

"SMTOWN LIVE IN TOKYO SPECIAL EDITION 3D," the 3D film version of SM affiliated idol stars' 3-day concert that kicked off at the Tokyo Dome in Japan on September 2 last year, is set to open in 50 theaters in Korea on October 11. SBS MTV, the production in charge, said in a press release that 36 artists from the talent firm joined the large-scale event and was attended by accumulated number of 150,000 for three sets.

"The 3D movie version has been made so vivid that it will bring out the heat and fever of the scene even to fans who have already watched the show," a SBS MTV official was quoted as saying.

Having drawn a record-setting number of audience members last year, the concert presented live performances of TVXQ!'s "Rising Sun," "Why" and Super Junior's "Sorry Sorry" and Mr. Simple." Girls' Generation also brought out their hits such as "Gee" and "Genie," and boy band SHINee and "Electric Shock" singers f(x) graced the stage as well.