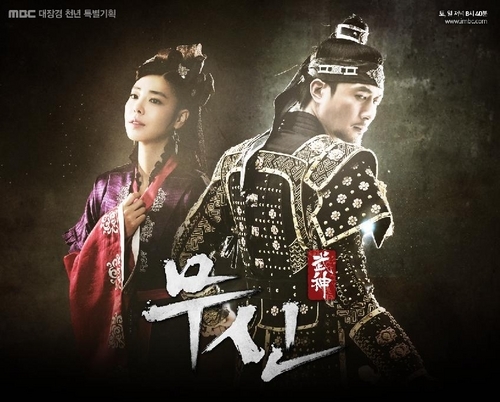 Actress Kim Gyu-ri (left) and Kim Ju-hyeok (right) pose together for their character poster of the historical TV series "Moosin," which began its air on February 11, 2012. [MBC]

Officials from their respective agencies, Namoo Actors and TN Entertainment, confirmed this morning through phone interviews that Kim Ju-hyeok and Kim Gyu-ri have been dating for three months.

The two have slowly developed a romantic relationship while shooting "Moosin," MBC's weekend TV series that hit the airwaves in mid-February.

"The two are still in the stages of getting to know each other. It's been too short to talk about marriage," an official with Namoo said, putting down the rumors that the couple could possibly tie the knot soon.

"Moosin" tells the story of a slave named Kim Joon [played by Kim Ju-hyeok] who later becomes the ruler of the Goryeo Dynasty (918-1392). He later forms with a romantic relationship with Song-yi [played by actress Kim Gyu-ri] while on his quest to rule the country. Making his acting debut in 1998, Kim Ju-hyeok has starred in many dramas and films under his belt. He is best known for his roles in SBS' "Terroir" opposite actress Han Hye-jin in 2008, "The Story of Bangja" (2010), "Tuhon" (2011) and "Couples" (2011).

Kim Gyu-ri, who used the name Kim Min-sun before changing her acting name, made small screen debut with KBS TV series “School" in 1999. She has since appeared in numerous dramas including “I Love You Hyun-jung" (MBC, 2002) and “Young-jae’s Golden Days" (MBC, 2005).