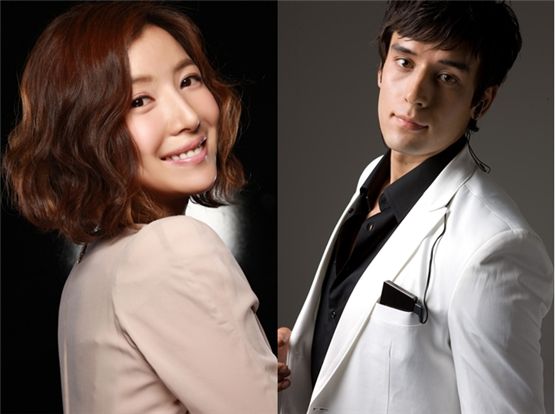 A rep with MBC's "We Got Married" told the magazine in a phone interview Friday that Kang and Yoon wrapped up shooting their first episode as a make-believe married couple on August 10, while it will hit airwaves tomorrow.

"The pair will portray an older woman and younger man relationship since Yoon is 34 year-old and Kang is 30 year-old,” the official explained.

The MBC rep also added that the upcoming episode will feature special guest appearances by past cast members of the show including Park So-hyun, 2AM's Jo Kwon and After School's UIE.”

Kang and Yoon will now be joining current married couples, T-ara's Eunjung and actor Lee Jang-woo, and Super Junior's Lee Teuk and actress Kang Sora. Born in France to a Korean father and French mother, Kang is known as a model and actor in the entertainment industry. He became a household name after starring in "High Kick 2" (MBC, 2009).

He starred a fighter in Channel A's upcoming series "Good-bye My Wife" opposite Hallyu star Ryu Si-won in May.

Yoon made her debut in the action film "Blood Rain" in 2005. She also starred in SBS' "Smile Again" in 2006 and "You are Pretty" (MBC, 2011). She recently wrapped up shooting SBS' hit weekend series "Gentleman's Dignity."