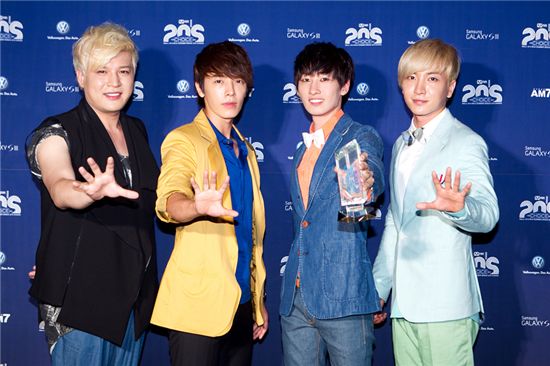 Top Korean idol group Super Junior has confirmed that they have already finished producing the Japanese version of their sixth full-track album, "Sexy, Single & Free," and its music video.

"We not only have recorded the title track in Japanese but other tracks as well. But unfortunately, we don't have any plans to do any promotional activities there. We want to say sorry to those who have been waiting for us in Japan," the team's leader Leeteuk said during the press interview at the sixth 20's Choice Award on Thursday.

Being one of the leading K-pop groups, not only in the country but abroad, Super Junior's Leeteuk also commented about Kangin's return to the group, who has been taking a break from Super Junior activities due to his two-year mandatory military service.

"One of the greatest assets of Super Junior is having many members in the group. Throughout the past years, we've had a few member leaving the team and it's good to have him back here. It feels like we're finding back our identity as a big K-pop group."

Meanwhile, the boys showed their will to visit the countries in the Middle East. "We know that we have a crowd of people from the Middle East and Russia coming to our shows to see us. We're so grateful for that and if there's a chance, we're more than willing to go there and learn the culture and experience traditional food," Leeteuk continued.

The "Sorry, Sorry" singers received a trophy for being chosen as 20's Global Star of the year and will reveal the sixth full-track album, "Sexy, Free & Single" online on July 1. The record will hit stores on July 4 and the first comeback performance will be held on Mnet's "M!CountDown" the next day.