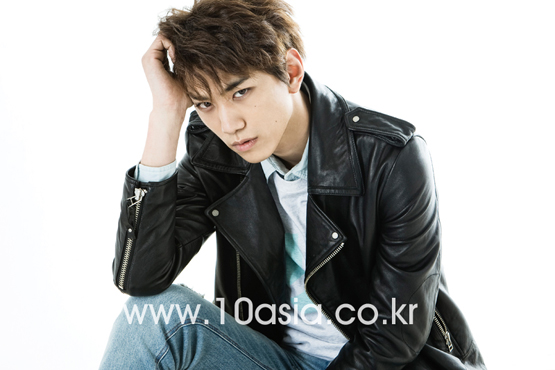 The winter has passed but returned again. From the cold-hearted genius Choi Chi-hoon in KBS' "White Christmas," he turned into Kwon Ji-hyuk in "tvN's "Shut Up and Let's Go," who put everything aside if it is for friendship and love. During a year of playing Ji-hyuk, Sung-jun has started to change by playing the two extremely different characters. The boy with an expressionless face who once said "I haven't met many people so far. I didn't even imagine myself being interviewed like this," is no longer there. Now, he was throwing jokes and even playing with his eyebrows while being interviewed. Sung-jun grew fast in time and he said he is "greedy in terms of acting now" and that he will become "the god of acting" someday. 10Asia met with Sung-jun who now has a strong presence and we heard his stories that made us anticipate his next project.

<#10LOGO#> TV series "Shut Up and Let's Go" ended with the members of the band embarking on their own new lives.
Sung-jun: It is a story of young men becoming adults. The ending may be bittersweet but I liked it and it seemed more realistic. Honestly, the members probably didn't know how long they can live in their own world. I don't have any argument about how the show ended because I feel that it is right that they each chose their own path. The thing is, I can't truly let go of my character Ji-hyuk because I spent nearly every single day being him for two months.

"The basis of rock spirit is having conflict" 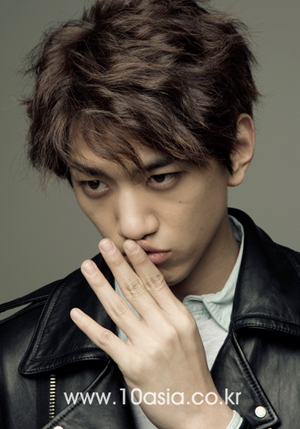 <#10LOGO#> However, according to the 'Oh Boy Project' C.E.O Park Sung-hye, you were a bit indifferent towards the show when you were first cast for Ji-hyuk's role (laugh).
Sung-jun: Me? Uhm......it's true (laugh). I felt like turning down the role when I first found out that the story was about 'pretty boys.' I thought a lot about how I would act out my character in something close to being a reality show. First, I thought "Shut Up" is about a guy from a rich family or a story based on a fantasy novel of pretty guys. But when I read the scenario, the story was completely different from what I thought. The drama told about conflicts between rebellious youths.

<#10LOGO#> I heard that you dreamed of becoming a rockstar and even learned to play the guitar. Were you able to fulfill your dreams by playing a guitarist in the show?
Sung-jun: That's true. I wanted to become a jazz pianist when I was young but I changed my dream to becoming a member of a rock band after I was hooked to rock music in high school. Once, when we had band practice, I told Lee Hyun-jae that we should really form a band because we sound pretty good when playing together (laugh). It was really fun and I was enraptured by our harmony. I think I had easier time playing an instrument than the other members because I played a similar character in the film "Dangerously Excited." But of course, I'm not 'great' in playing the guitar. <#10LOGO#> I heard that the members discussed a lot about music.
Sung-jun: We did. Both Lee Hyun-jae and Yoo Min-kyu listen to a wide range of music and we shared what kind of music we listen to these days. That was when I got a grasp about how they feel when listening to certain styles of music. Director Lee Kwon also pursues a music career under the group Mad Soul Child but we didn't have any time to talk about music with him because our schedule was pretty tight.

<#10LOGO#> What kind of music do you listen to?
Sung-jun: I used to like modern English bands like Kasabian and Jet but now I like older bands. Just recently, my friend asked me if I listened to The Doors and I was hooked with their songs, such as "Alabama Song." I also like hip-hop music like Kayne West's, while it's been years since I started to listen to hip-hop after listening to Eminem in middle school (laugh). I don't listen to a full song but I'm the kind of person who just flips through songs. For example, I could find a hip-hop beat to be interesting but after a few minutes, I would play another song. But when I have a specific song that I like, I would listen to it over and over again. When shooting for "Shut Up," I was obsessed with Radio Head's "Fake Plastic Tree" and listened to it nearly 200 times. If it's not that, I just listen to music like I'm studying it. Like analyzing how the guitarist played his instrument in the song and stuff.

<#10LOGO#> You seem to have quite an interest in music. Did you have any special experiences when you sang the songs "Jaywalking" and "Wake up?"
Sung-jun: Before I recorded the songs, I received a few lessons and became familar with the basics of vocals. And it took about four to six hours in recording one track. I didn't think much about it but it was really interesting to see my song pop up when I searched my name on a music website. I thought the recording went well and my voice came out pretty nice (laugh). I know that I should focus on my acting since I'm still a beginner but I hope to release a music album someday, like Lee Min-ki did.

"I want to be in a hard-boiled action movies where the characters fight till they bleed."

<#10LOGO#> "Shut Up and Let's Go" is a drama that not only focuses on the rock band but also fulfills the different aspects that all men fantasize about. That could have made you to show off a bit in and out of the show (laugh).
Sung-jun: I liked how I can fight and make myself to look cool, for an example, in the scene where Ji-hyuk calls out everyone to come and fight him. (laugh) I'm sure that in real life, no one would even know who I am if I started a fight. There were several times where we were injured despite countless number of practice for the action sequences. I tried really hard not to avoid a punch till it reaches an inch away from face. But I remember one time when I got hit because I lost my timing. Or maybe that person punched me on purpose (laugh).

<#10LOGO#> So, are you motivated in taking more full-on action roles?
Sung-jun: Definitely. I'm sure that all guys would feel the same way. Especially if they were stunned when watching the action sequences by the late Bruce Lee! I also like the action scenes done by Donnie Yen. I wish I can play a role that shoots a gun as well. I want to be in a hard-boiled action movies where the characters fight till they bleed. And it would be even better if the movie or drama surrounds a distinctive culture, like centering the culture of the Yakuza.