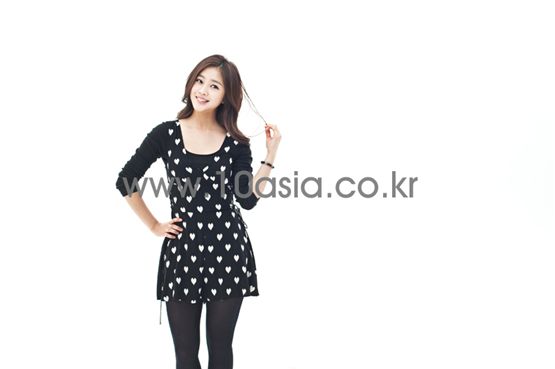 My name is Cho Bo-ah.
I was born on August 22, 1991. I have a sister who is four years younger than me but her maturity makes her seem like she is the older one. She is a fan of Sung-jun so she asked me for his autograph and I asks for the chocolate I advertised in a TV commercial.
I will enter SungkyunKwan University's School of Arts in March. I don't really have much interest in going on an overnight trip from my major or other romanticized ideas about college. I think it's because I am two years older than other freshmen. (laugh) I just want to learn a lot about acting and I feel that minoring in directing will be a great help.
I do yoga at home whenever I have time, but I don't do it passionately because it's just something I do for an exercise. I guess I do it because I'm obligated to do so and to stay fit. (laugh)
I make a lot of fried sweet potato, sweet potato sticks and sweet potato cookies and eat them because I love sweet potato. In order to make sweet potato cookies, you have to boil the sweet potato, smush it and put toppings on it and bake it in the oven. It's good and you don't gain any weight.
I shot a chocolate commercial and I wasted a lot of chocolate to shoot the scene. I had to repeat the act of taking a bite out of a chocolate bar until the director had his favorite scene. We ended up with boxes of chocolates that were left open. I shared the chocolates I received from the chocolate company with my family, friends and the staff, because I was on a diet and can't eat them. You can't stand confidently in front of a camera if you don't take care of your body.
I always think about chocolate, brownies and cakes whenever I get hungry when waiting to shoot for my scenes. I really like sweets and I also like food like hamburgers, steak, chicken and pizza. And I'm going to eat all those food when I'm old and on my death bed.
I shot my first scene at the rooftop room and I kind of like it. You can see the entire city of Seoul from there and the view is amazing. I don't know if I should be saying this but since the room is small it's very cozy, especially when having Ji-hyuk (Sung-jun), who is handsome, next to me. (laugh)
Not a lot of people know who I am. But these male students came up to me and asked for my autograph when I was walking around the city with my sister. I was amazed and dazed.
I go bowling with my friends regularly. I'm not that great but I just like the atmosphere of hanging out with my friends. My score? It's kind of embarrassing but it's not even close to 100. I guess someone who's real good will probably score a 200 or so. Still, none of my balls hit the gutter.
I was really interested in foreign languages when I was in middle and high school. That is why I wanted to work at the Ministry of Foreign Affairs and Trade but I am sort of putting my studies behind because I am busy. I will study real hard when I go back to school. Oh! I also want to learn Chinese.
I would like to learn how to dance. Maybe a ballet...I don't know. To be honest, I remember when I was younger my dance teacher told me that I can't dance because my body is too stiff.
I am really interested in beauty. Nowadays when I'm shooting for "Shut Up and Let's Go," the stylist dresses me up in pretty clothes and does my hair and makeup which is why I just go around wearing sweats, sun cream and a hat. I've changed!
I like long hair. I kept growing it after I had a short cut in middle school. The hairstyle that I want to try out is a long, wavy hair and the Cleopatra style, which is a straight hairstyle with a bang. I think I will try them once I’m finished with “Shut Up.”
I like crime thrillers whether it's a book or a movie. I prefer American dramas like "CSI" and "Heroes."
I have several friends who monitor my works. They're pretty straight forward when telling me how they felt about my acting after watching each episode, like when telling me which part of my acting should be fixed and all.
The director gave me compliments on my acting in the tenth episode of "Shut up," where I get attacked by Pyo-joo (Kim Hyun-jun). He told me that till now that was the best acting that he's seen from me so far. I felt that I was really focused on my role when acting it out. I must be an actor because it feels great whenever I get a compliment on my acting. (laugh)