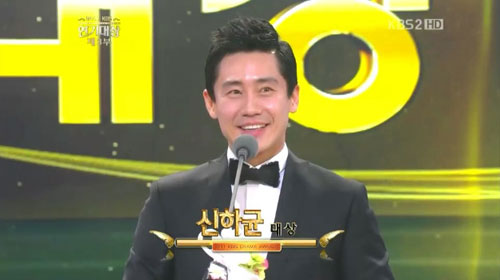 Shin received the grand prize of the year for his role as doctor Lee Kang-hoon in KBS' Wednesday and Thursday primetime series "Brain." "I am in a position which is more nerve-wracking than performing surgery. I don't even know what to say for my acceptance speech except for that I have tomorrow's lines running through my head," Shin said in his acceptance speech.

"Brain" also took the honors for best couple and the netizen's choice while other big winners that night included "The Princess' Man" and "Ojakgyo Brothers" which both took home seven awards each.

This year's ceremony was hosted by Jun Hyun-moo, Joo Won and Han Hye-jin and featured musical performances by 2PM and IU. - List of Winners for the 2011 KBS Drama Awards