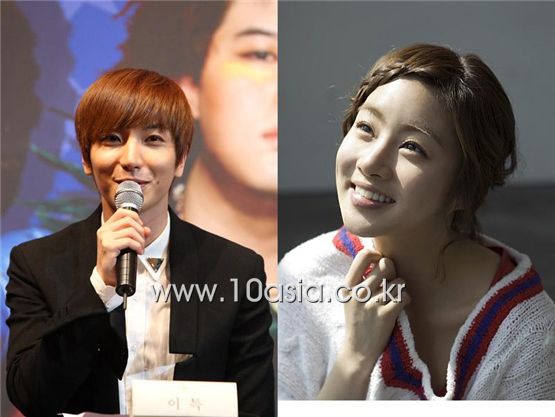 Korean idol Lee Teuk and actress Kang Sora have been cast as one of the latest make-believe couples to MBC's reality show "We Got Married."

A producer with the show told 10Asia over the phone on Friday that "the two already met twice to shoot for the program and their first episode will air tomorrow."

Lee, 28, is the leader of his boy band Super Junior which made its debut in 2005 with album "SuperJunior05" (TWINS)." He has played several small screen roles as well as hosting variety and radio programs outside of his group activities.

Kang, 21, made her debut in 2009 through horror film "4th Period Mystery" alongside actor Yoo Seung-ho. She recently starred in the summer blockbuster film "Sunny" and is currently shooting KBS' daily series "My Bittersweet Life." ※ Any copying, republication or redistribution of 10Asia's content is expressly prohibited without prior consent of 10Asia. Copyright infringement is subject to criminal and civil penalties.