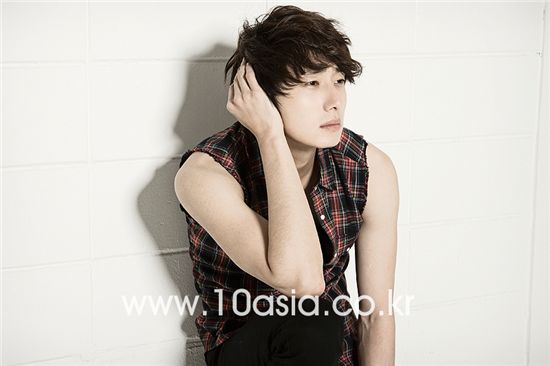 Jung Il-woo shone with the appeal that someone only of his age could -- he checked out his jaw line in the mirror this way and that when told he seemed to have put on some weight after "49 Days" ended and showed off that he had great chemistry with actress Lee Yo-won for the show yet remarked, "We don't keep in touch after filming ended. She has to look after her baby and you know, because we're just cool like that? (laugh)" The 'Scheduler' Song Yi-soo that he played in SBS TV series "49 Days" which ended on May 19 was the modern day version of the angel of death, yet the Scheduler played by the cheerful Jung Il-woo was an ordinary guy who was grumpy and sensitive when it comes to fashion yet a hopeless romantic in front of the woman he loves. So what meaning did "49 Days" have for Jung who, after experiencing ups and down in his career through his debut role in MBC's "High Kick," "The Return of the Iljimae" and "My Fair Lady," returned to the small screen after a year and a half long hiatus? One thing for sure is that the two months he worked on it were spent with "fun and at ease."


10: You've shown quite a bit of attachment to your character Song Yi-soo from "49 Days," to the extent that you wrote, "Today... I somehow miss Yi-soo a lot... Song Yi-soo... Goodbye," on your Twitter account even after the drama ended. What about your character do you think you were you so drawn to?
Jung Il-woo: Song Yi-soo was refreshing because I hadn't seen anyone like him before and I felt that I'd be able to make him seem attractive if I did a good job of bringing out the double-sidedness to him. Angels of death usually have the image of being cold, dark and dignified but I wanted to make the Scheduler seem like someone that viewers wouldn't feel hostility to. I tried to make him seem as natural as possible. 10: Your character was just a Scheduler at the beginning of the show but after the fact that you and Song Yi-kyung (played by Lee Yo-won) being past lovers emerged, you were at the center of the romance.
Jung: My character actually didn't have that much weight at first according to the script. He was supposed to help out Shin Ji-hyun (Nam Kyu-ri) from time to time and let go of Yi-kyung after telling her that he really loved her. But he came to have bigger weight once the show started and we had meetings.

10: How did you try to express the emotional changes that Scheduler experiences toward the latter half of the show?
Jung: Well acting the scenes after Scheduler finds out that Song Yi-kyung was the woman he loved was difficult, especially when she is possessed by Shin Ji-hyun. I had acted toward the possessed Song Yi-kyung in a different way from the very beginning though. I told myself that even if the Scheduler doesn't remember anything, he would treat her differently in some way since he's the woman he had loved. I tried not to make it too obvious, just in very subtle ways, such as talking to her as if she was the person he loved. I think having good chemistry with Lee Yo-won helped a lot.

10: In what sense did you have such good chemistry with her?
Jung: She would act according to what's going on for the shoot. A bit spontaneously but I think that's why my acting came out better. She'd react to me very naturally so I'd immerse myself into that scene instead of thinking about what line I'm supposed to say next. 10: Did you not feel such bliss when working on your previous projects?
Jung: I don't think there was a single time that I felt that I had good chemistry with an actress before. My acting lacked in many ways back then so I was too focused on myself. But I think I've come to be able to notice what other people do now as well.

10: There were a variety of responses to the fact that Shin Ji-hyun dies in the end and that Shin Ji-hyun and Song Yi-kyung were sisters. As the person who played Song Yi-soo, how do you feel about how his relationship with Song Yi-kyung ended?
Jung: I think the reason viewers liked the Song Yi-kyung and Song Yi-soo as a couple was because although they loved each other so dearly, they would never be able to see anything happen to it. And it wouldn't make sense if their relationship worked out. Song Yi-soo was already dead. 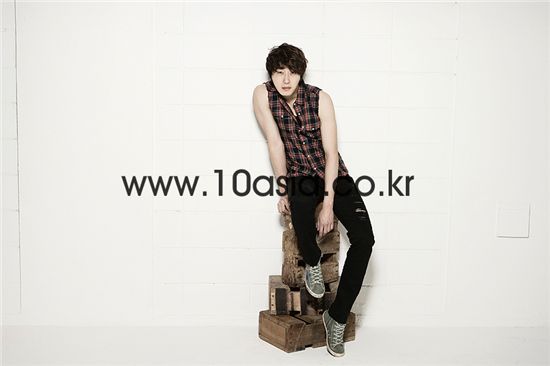 10: It's been five years since you've made your debut but there are people that still remember you as Yoon-ho from your debut role in sitcom "High Kick." Are you not disappointed about it?
Jung: I think actors should be happy about the fact that they are remembered by a certain project. People usually say, oh, it's who and who, when they see us but it's very rare that they'll remember what roles we played. At the same time, a lot of people recognize me as the Scheduler. I'm sure I'll be able to shed myself of my image as Yun-ho from "High Kick" if I try harder.

10: Do you miss the popularity you enjoyed back then?
Jung: Well, I'm trying to rid myself of having such thoughts because it won't help being tied down to them. There will be times when things work out and times that they don't, even if I work hard. And I do think it'll actually be difficult to go back to being as popular as I was when I did "High Kick." Being loved by people for 11 months isn't as easy as it sounds. (laugh)

10: So you shot to popularity, realized it was a bubble, and have now recovered a character that suits you. With what sort of project and role did you want to present yourself to the public with after a one and a half year hiatus?
Jung: I was actually handed a lot of scripts while I was taking my break, including several in which I would play the main character. But I told myself that the role I'd play is much more important that how often my face would show on the screen. I wanted to play a character that could show a variety of sides to him including him being cheerful, serious and funny and Song Yi-soo in "49 Days" was that very character. I used to work like hell before but I felt more at ease this time and had fun with it.

10: Does that mean you now know what you're good at and which characters you need to play to feel happy?
Jung: It's why playing a character that I can do well at will be important from now on. Before, I wanted to take on risks and challenges and not play similar characters. But I suddenly came to the realization that no two characters are the same. How could they give off the same vibe, no matter how similar they are, when they have different directors, scenarists and plots? I don't think I have a style of acting that is unique with me, nothing that says 'Jung Il-woo,' nor do I have any characteristics that I am sure of suiting me. I'd like to become good at a particular genre.

10: Then do you plan on focusing on playing cheerful characters that you have said you have more fun with?
Jung: I'd like to. But characters that are cheerful yet significant in some way. Just like the Scheduler was.

10: When will you take on your next project?
Jung: I think a decision will come within the next two months. (laugh)

10: That's pretty fast. (laugh)
Jung: I think I'm the happiest when I'm working so I plan on keeping steady at it. I shouldn't regress anymore.