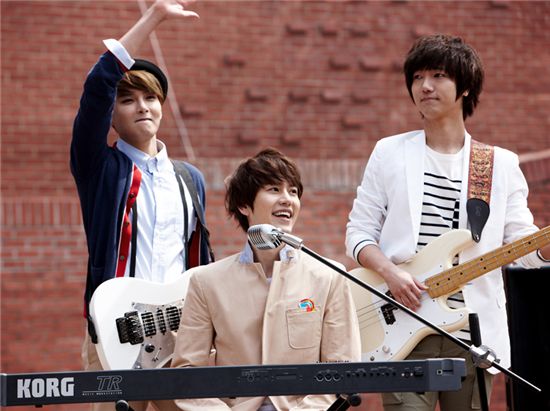 Super Junior K.R.Y., sub-unit of popular idol group Super Junior, will reveal the theme song for the third season of Mnet's music competition "SuperstarK" this week, according to the show's producer Mnet.

"We have prepared this song in hopes that it will give strength and courage for the competitors on the show," the members of Super Junior K.R.Y. were quoted as saying. "We hope that it also helps them through the various rounds of the competition."

"FLY" will play on the show starting with the preliminary round in Busan on April 24 till its wrap-up in November. Several other K-pop artists have sung the theme sung for "SuperstarK" including girl groups Jewelry and 4minute.

First formed in November 2006, Super Junior-K.R.Y. -- composed of members Kyuhyun, Ryeowook and Yesung -- is known for being the ballad unit of the four sub groups of Super Junior that include Super Junior-T, Super Junior-M and Super Junior-Happy. They have held a number of concerts in Japan and Taiwan last year and participated in the soundtracks for entertainment show dramas in the country.