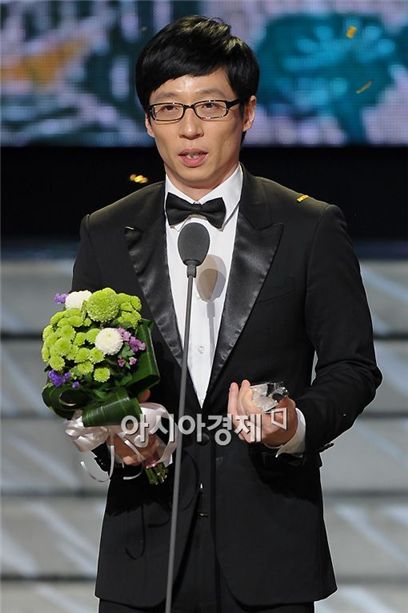 At the awards ceremony held at MBC's Dream Center located in Ilsan, Gyeong-gi Province, Yoo was awarded the top honor for his role as emcee for MBC's variety shows "Infinite Challenge" and "Come Over," making it his seventh award during a year-end program. The big winner during the award ceremony was entertainment program "World Changing Quiz," which scored first prize (female) under the category of variety show to comedian Cho Hae-ryun, first prize (host) in a variety show to Park Mi-sun, Lee Hwi-jae and Kim Gura, second prize in a variety show (male and female) to Kim Hyun-chul and Kim Shin-young as well as the people's choice for entertainment program.

While the lifetime achievement award went to the late comedian Bae Sam-ryong, renowned for his slapstick humor and trademark image as the fool, who passed away in 2007 due to pneumonia.

▲ Writer of the Year : Kim Myeong-jung (Come Over)