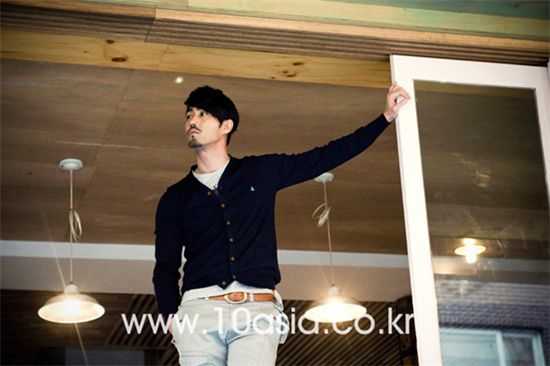 Actor Cha Seung-won never gets tired. He melted viewers' hearts through his role in SBS' "City Hall" last year and soon after played the stylish detective in movie "Secret." Then in order to play the role of Lee Mong-hak, he armed himself with sharp teeth and a long sword for film "Blades of Blood" which is set to open in theaters on April 29. A slew of other large productions starring Cha, including movie "Into the Fire" and drama "Athena" are also standing in line for release later this year. Below are excerpts from 10Asia's interview with Cha Seung-won.

10: Your film "Blades of Blood" is awaiting release. It's already receiving a lot of hype because it's helmed by famed director Lee Jun-ik and stars yourself and actor Hwang Jung-min. How do you feel about this movie?
Cha Seung-won: I think it'll do roughly well. Roughly. (laugh) Last night I dreamt that I was heading somewhere, walking on a field covered with snow. Snow means wealth. And when I climbed over a fence, I saw was an ocean. I woke up saying wow! (laugh) 10: You've dreamt a lucky dream, and I think you had expressed your expectations for "Secret" too when we last met.
Cha: Honestly, I didn't have high expectations for the film. It lacked in ways that make it not fun enough for a commercial film. Towards the end, I realized that I don't feel that embarrassed about doing this film so I think that's all that matters. If the audience feel the same way about it too, then I think they'll consider historical stories as something that can't always be fun but okay to watch like this too.

10: One of the disadvantages would be that the audience have experienced a new message and imagery through traditional drama KBS’ “Slave Hunters.”
Cha: That is why I think "Blades of Blood" could be slightly boring for those people. Our movie is simple so some will enjoy that while others may feel that something is missing. Plus, the audience has just become so used to exciting elements. I was recently listening to the radio while driving and it played gags of comedians Bae Sam-ryong and Ku Bong-seo from 1972. It isn't that funny anymore but the listeners back then were having so much fun. That's how much they needed to do to provide enjoyment to people but it just shows how times have changed. There's a lot more fun and excitement. So I think movies have to meet those expectations to a certain extent.

Scenes from "Blades of Blood"

10: In that sense, your character Lee Mong-hak is not that exciting. He has great self-control and constantly contains and hides his feelings. Were there any moments as an actor where you felt frustrated by this?
Cha: It's true that there was a limit to what I could with the role and also because there wasn't anything I could add on to the character. However, that is the extent to which the character is meant to be portrayed. If I was told to play the role again, I would do it in the same way. I think I showed both the maximum and minimum I could with the role of Lee Mong-hak. 10: Then what was the reason you took on "Blades of Blood" despite the restrictions you had to playing your character?
Cha: Because I wanted to work with director Lee Jun-ik. I thought it would be valuable working with him. I wanted to become acquainted with him and it was even better that Hwang Jeong-min was starring in it as well. Director Lee is someone who knows well about people while also trying to understand them. Our acquaintance could lead to us working on future projects. And by working with other actors, there is a joy that comes from finding significance [to the film] that couldn't be found in the scenario.

10: You are known for looking great in a suit but also looked quite good in just the white Korean attire and the traditional hat in movie "Blood Tears."
Cha: I know. (laugh) I hope to be able to maintain that stylishness about me, whatever role I play, as long as it doesn't get in the way. But I hadn't thought of wearing the traditional Korean hat in the beginning.

10: How come? It was impressive how Lee Mong-hak doesn't show his eyes right away but through the hat.
Cha: That's why I'm glad I had to. (laugh) But I had originally had a different image of Lee Mong-hak. Before "Slave Hunters" came out, I saw an image of a guy who had tied up his hair in a rough way. And I thought that would match Lee Mong-hak's image but they made me wear the traditional hat. I was a bit worried because there is no masculine appeal to a scholar wearing the traditional hat. The layers of the full-dress attire and traditional hat rather covers up a man's masculinity. But upon watching the movie, and how his eyes suddenly appear under the hat, I realized that it's a good thing he wears it. 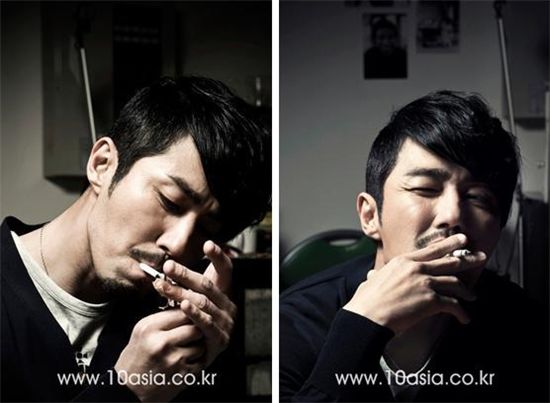 10: You have finished filming both "Blades of Blood" and "Into the Fire" and will soon begin shooting for "Athena." Is the reason you are taking on such big productions because you want to build up on your title as an actor or star?
Cha: It's part of the reason. An actor has to be considered quite lucky if he gets to be a part of a big-budget film. It's not something you can force to be done. Even in the eyes of the audience, doing a big production followed by a small one is different from doing several small productions. But more than anything, the planning for these productions were good. "Blades of Blood" would be a strong historical drama in that it would be helmed by Lee Jun-ik whose name is a brand in itself and "Into the Fire" pays tribute to the 60th anniversary of the Korean War this year which would never come along again. "Athena" has one of the biggest budgets in drama history so I'm really happy as an actor to be taking part in all of these. I think I have the ability to not be swayed by taking part in such big productions now. If I had been in my 30s, I might have felt otherwise and have acted differently. It's probably the same for actor Jung Woo-sung. We're taking part in a drama which costs a huge amount of money, but come on, what does that have to do with us? I think we're at the age where we don't get swayed by the material aspect of the productions.

10: But the audience probably don't realize the capacity of a major blockbuster drama that costs up to billions of won to make. The reason the drama is receiving so much hype over "Athena" is rather because you and Jung Woo-sung are part of the cast.
Cha: I felt really good after reading the article. Out of 10 people 9.5 said they like it. The expectations the public has for the show is burdensome but at the same time I am thankful. I work for the public and if they don't show any interest it makes me sad.