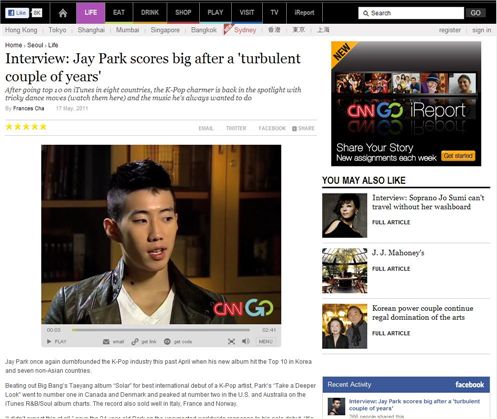 CNN GO, which covers cultural news from around Asia, interviewed Park last week to get a glimpse into his singing career and the reason for his popularity that has reached into America and Europe. In their May 17 article titled “Interview: Jay Park scores big after a ‘turbulent couple of years'," CNN gave a brief summary of Park's dramatic rise and fall in the Korean show biz industry, including how he was a member of popular K-pop group 2PM to how he left both the boy band and the country after stirring controversy on comments he left on his MySpace account in the past, then to his triumphant return to Korea with his latest single “TAKE A DEEPER LOOK" which not only topped several music charts in Korea but was listed within the top 10 slots of iTunes charts in eight countries.

“It’s good right now. I came back with the music that I wanted to do, R&B and hip-hop, and the fans they love it, everyone else loves it so I’m lovin’ it so that’s good,” said Park in the 180-second video clip.

“Even if it was turbulent couple of years I just tried to keep it positive throughout the whole thing cause’ you know nothing goes on forever.... and everything turned out great so I’m happy.” Park added that he also considers himself lucky to be one of stars to appeal through YouTube which won him fans internationally and is willing to collaborate with other overseas singers to widen his music career in the future.

Park, whose Korean name is Park Jae-beom, debuted as a member of 2PM in 2008 but parted with the group early last year after stirring controversy over remarks he wrote regarding Korea during his trainee period.

He then kicked off his solo career late last year after signing with major talenthouse Sidus HQ and has released several single albums since.

Currently, Park is also filming a movie titled “Mr. Idol” helmed by director Ra Hee-chan, about making an idol star out of a young man who dreams of becoming a vocalist of a band, set for release in the latter half of this year.