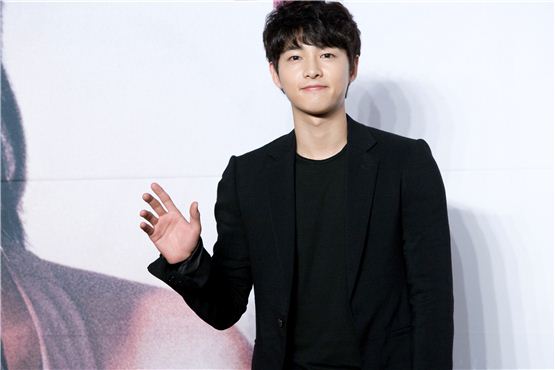 Sidus HQ said in a statement Monday that Song has lent his voice for the ballad tune “Real” [translated title], the drama’s fourth original soundtrack due for release on October 31. The sentimental song with sad lyrics will well-deliver Kang Ma-roo’s confession of his love toward Seo Eun-ki [depicted by Moon Chae-won], the officials explained.

Starring Song, Moon and actress Park Si-yeon, the bleak melodrama has been garnering high popularity among local drama fans. It comes as no surprise that the show has been dominating the Wednesday and Thursday ratings chart for the fifth week in a row.

For the TV series’ first original soundtrack released on late September, JYJ lead vocal XIA sang “Love Is Like A Snowflake” and helped viewers deeply empathy with the drama’s tragic love triangle. Meanwhile, the "Werewolf Boy" turned made his appearance in a new music video for Kim Jong-gook's "Man Also Feel Sad." Their relationship dates back to when Song made his guest appearance on SBS "Running Man."