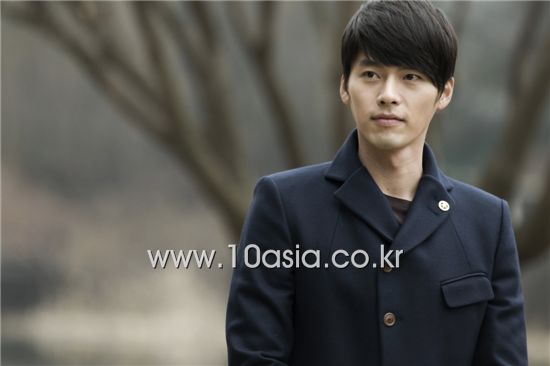 "That Woman," the soundtrack to SBS TV series "Secret Garden" is conventional. How the melody will flow and song be rearranged can easily be predicted. But you will stop in your tracks upon hearing where the lyrics say, "This rotten love." That is the power solo songstress Baek Ji-young holds. She will not wail when singing the phrase and the notes may climb higher but her voice will not grow much louder. Baek Ji-young knows -- how women may at times want to cry their hearts out yet have to go on with life pretending nothing is wrong. Baek instilled sincerity into a conventional song. And that is what Gil La-im's (played by Ha Ji-won) love is about.

Meanwhile, Kim Ju-won (Hyun Bin) does not know why Gil La-im wants a break from their relationship. But Hyun Bin knows that his character must still do his best. That is why Hyun Bin puts his heart into singing each and every note of "That Man," the male version of "That Woman." He does not prolong any of the notes nor does he use amateurish technique. Even at the age of 29, Hyun Bin knows how to sing like a boy who is singing with a church choir for the first time. The song being that of a boy who does not know of love too well but is sad because of it. And after Gil La-im falls into a coma in the 17th episode of "Secret Garden," Kim Ju-won's eyes brim with tears after reading a phrase in "The Little Mermaid" that says, "And the Little Mermaid vanished like bubbles." He wants to do something about what has happened but does not know what. He wants to cry yet knows he should hold his tears back. And that is what Kim Ju-won's love is about.

If an ordinary man showed off his track suit, saying that each and every stitch was laid by an Italian artisan, it would come off as absurd pretentiousness. But Hyun Bin says it whiningly, like a boy who wants what he is wearing to be noticed. He is also not just plain immature. When his mother demands for him to break up with Gil La-im by saying, "If you can live solely on love, go that way," he holds back his tears. He is a boy who wants to cry when he is sad but he is aware that he lives in a world that he should not. He may be an adult out in society but is a boy when it comes to love. He is mature yet soft-hearted, and may be good at work but is inexperienced at love. So although seemingly a sturdy grown-up on the outside, Kim Ju-won gained the reputation of being a sincere man when he revealed a glimpse of the soft-hearted boy he is on the inside.

That is the power Hyun Bin holds, this actor who has twice played the heir of a conglomerate and has been successful at it both times. He is also someone who will take on the role of a gangster, as he did in MBC TV series "Friend, Our Legend." But he does not play each character entirely differently. He is rather the type that will interpret characters based on his sensitivity. Dong-soo, Kang-gook and Sam-shik were good enough at what they do to be acknowledged by society. But they did not think that enjoying work and bearing with hard situations is manly. Jio from "Worlds Within" may have always smiled in front of his mother but would cry his heart out when alone. He was a boy who knew that no matter how tough the world we live in is, you need to take your lumps. He was also a boy who will not come up with excuses and his broad shoulders were reassuring. However, he had sad eyes that tried so hard to bear pain rather than accept it in a calm manner. Hyun Bin is a rare actor who can show such sides to a man on the small screen and when that meets with a popular melodrama like "Secret Garden," a delicate sensitivity is created from within its typical setting. Hence it is only natural that he can star in a remake of a romantic classic movie like "Late Autumn." A boy's pure love is a good fit for a story of old-school love where lovers needed nothing else in life but love.

That is why the 17th episode of writer Kim Eun-sook's "Secret Garden" was a unique moment for the entire drama. The main male characters she usually draws on are always great at the workplace, are full of confidence and hence are the ones that lead their women. But the Hyun Bin in "Secret Garden" acts out Kim Ju-won as a man who too is good at his work but has the sensitivity of a 21-year-old who quietly falters between love and what his mother has given him. The Kim Ju-won who persistently insisted he gets to lie next to Gil La-im could not have come off as just cute had someone else played his role. "Secret Garden" has been void of a story although many incidents occurred after the souls of the two main characters switched. The issues of status and sexual identity of homosexuals, existent in the beginning of the drama, have become meaningless as well. Sun (Lee Jong-suk) not being a homosexual will not affect the story's development and how Kim Ju-won's mother makes an occasional appearance to get in the way of the two lovers has been seen plenty of times. The mother appeared every two episodes or so, rattling up the two, after which the drama would repeat the sequence of conflict-make up-affectionate scene-sweet dating, failing to make any progress with its story -- until it suddenly raised its pitch. In the 17th episode, the appearance of a driver who runs his car into Gil La-im's car despite restraint by the crew of a movie set, was solely meant to create a crisis. It does not make sense. All there is left is for viewers to do is to focus on the characters that established defined personalities through the various incidents.

But like "That Woman" and "That Man," viewers stopped in their tracks at the 17th episode of "Secret Garden." Hyun Bin, who read fairy tales in KBS' "Snow Queen," did not sob nor swallow back his tears when reading "The Little Mermaid" in "Secret Garden." Instead, he transformed all into the sincerity of a soft-hearted boy who bears through every conventional tragedy with his eyes brimming with tears. Hyun Bin instilled a sincerity into his character with his acting, beyond the character that writer Kim Eun-sook established. This man appeared when everyone was speaking of the triteness of love. This man who cries with the sincerity that he is experiencing everything for the first time.