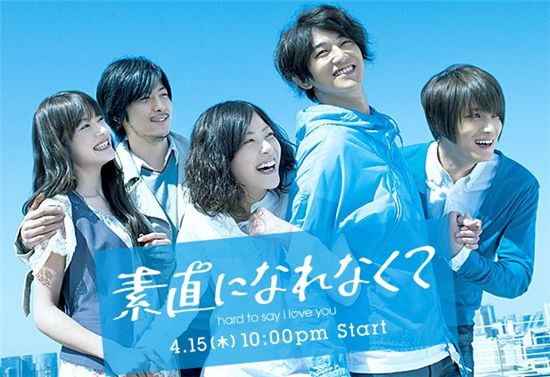 According to statistics released by a local research firm, the first episode of drama "Hard to Say I Love You" scored a 11.9 percent viewership rating, coming in second behind Asahi TV's popular crime drama "Omiya-san" with 15.4 percent. "You", which airs every Thursday evening at 10 p.m., is a story of friendship between five young men and women who became acquaintances through Twitter, a popular social networking and micro-blogging service around the world.

Hero, whose real name is Kim Jaejoong, debuted in 2004 as part of five-member boy band TVXQ. The group became one of the most phenomenal K-pop acts in the country and throughout Asia, selling numerous records and recently making history in the Japanese music scene. TVXQ has been making headlines as of late for announcing that they will no longer be working in Japan as a group and that the members will go their separate ways to pursue individual careers.

The band had officially stopped working as a group in Korea since last July due to a legal dispute between three of its members -- Xiah Junsu, Hero Jaejoong and Micky Yoochun -- and talent agency SM Entertainment over their 13-year exclusive contract.

The three members had asked the court to nullify their contract with SM, claiming that their contract period was "too long", and the court had ruled in favor of them, ordering provisional disposition of the contract.

However, the legal battle heated up again when SM filed an objection against the court's decision and sued the three singers for KRW 2.2 billion won, demanding financial compensation for damages the agency allegedly suffered from the members' investment in cosmetics business and their cancelled concert in China.

Last Thursday, Xiah, Hero and Micky announced through their Japanese management agency AVEX that they had formed a new group through which they will be pursuing their music careers.