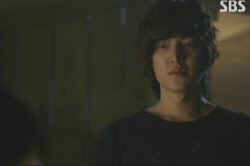 썝蹂몃낫湲 븘씠肄
SBS TV series "City Hunter" - Wednesday/Thursday 9:55 P.M.
There is a definite reason that Lee Yoon-sung (played by Lee Min-ho), the main character to "City Hunter," needs to become a city hunter. And that is the biggest difference between this drama and its original work, as well as why it presented itself as its prequel. That is why the first episode to "City Hunter" can be seen as being successful -- not only did it describe each character but it also explained the 'why' factor. Lee Jin-pyo (Kim Sang-joong) watched his friend Park Moo-yeol (Park Sang-min) sink to the bottom of a sea after throwing himself into the waters to save him and Lee Yoon-sung belatedly finds out that his father Park Moo-yeol died after falling victim to his country's administration. So there is no better justification for his decision to become a city hunter than it being for losing the person he loved the most instead of it being for reasons such as out of patriotism or to realize social justice.

That is why the scene where Yoon-sung declares to change and starts shaping his own destiny after being raised as a strong warrior by Jin-pyo for reasons Yoon-sung himself is not aware of, is in itself a preview to "the world's most cruel revenge." And actor Kim Sang-joong is the one who helped yesterday's story maintain a tension which brought out how determined the formerly easy-going and considerate Yoon-sung has become. Without having to speak a word, Kim's presence dominated "City Hunter" as he silently saluted his dying friend and looked on at betrayer Choi Eung-chan (Chun Ho-jin) with loathing eyes while holding a knife at him. Convincing viewers of the somewhat odd situation where he kidnapped the young Yoon-sung without letting Kyung-hee (Kim Mi-sook) know of it, because "looking out for Kyung-hee and my child" was Moo-yeol's will, was due to Kim Sang-joon's acting skills as well. Like the Jin-pyo that will silently help Yoon-sung with his plans for his father's revenge, it seems that Kim Sang-joong too will be a strong supporter for "City Hunter" main character Lee Min-ho. ※ Any copying, republication or redistribution of 10Asia's content is expressly prohibited without prior consent of 10Asia. Copyright infringement is subject to criminal and civil penalties.