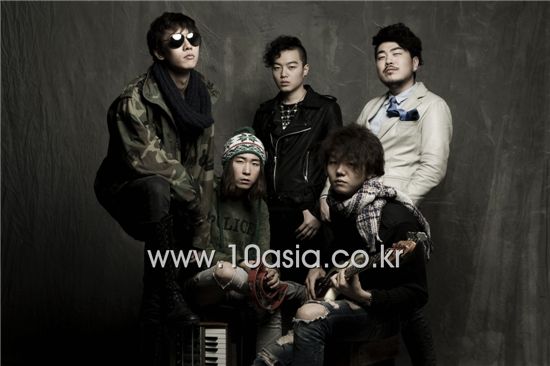 썝蹂몃낫湲 븘씠肄
The Koxx is a rock band composed of Lee Hyun-song (vocals, 23), Park Sung-bin (bass, 25), Shin Saron (drums, 23), Lee Soo-ryun (guitar, 23) and Shaun (synthesizer, 21), all majoring in applied music at Howon University, who decided to form at a year-end party in 2008. And just a year after debuting in the indie scene and barely four months after the release of their first EP album "Enter," they are grabbing attention as one of the hottest indie bands, being rushed to and fro between rock festivals, radio shows and interviews. It cannot be easy for a band used to parties and club performances to suddenly release an album and work on a tight schedule. So although when signing with their current agency Happy Robot Records, they were immediately denied their request to have a party held under their name once every two months, it is hard to separate them from such parties -- they said they plan to throw a party under their name after their first full-length album is released. 10Asia spoke to the five-member band to see how they are coping with the changes to their lives.


10: Your band wasn't included in the lineup for this year's Grand Mint Festival (GMF). Did you enjoy it comfortably this time as a member of the audience?
Lee Hyun-song: This year's lineup was amazing. And even incredible artists had to perform at 2 o'clock in the afternoon so our company said 'Let's take a break this year. (laugh)
Park Sun-bin: But we really like festivals so went to a lot even before we formed Koxx.
Shaun: We went back to being the audience right after our own performances at this year's Jisan Valley Rock Festival and Pentaport Rock Festival. We even got a place to stay nearby. (laugh)
Lee HS: I personally enjoyed Hot Potato's performance the most at this year's GMF.
Park: I watched No Reply's performance at the main stage then went to that (Hot Potato's) stage but there was such a long line that I thought, 'What's this line?' And I [pointing to Shaun] liked DJ Shaun's performance the most. (laugh) 10: Shaun, you and Daybreak vocalist Lee Won-suk both deejayed at the Ghost Dancing stage but the atmosphere was completely different. Lee Won-suk's deejay time was more like a fan meeting while you said very few words and just completely concentrated on deejaying. I think that's why a lot of manias gathered when you deejayed.
Shaun: I did play GMF's theme song and music by GOD and SpaceA at parts in between. (laugh) Some DJs have this sort of pride where they play music they like and hope the audience will like it. And I respect that about them but I personally think you need to play a certain amount of music people can recognize at parties for everyone to have a good time. The response was great when I played GOD's "Where You Should Be" during my time. 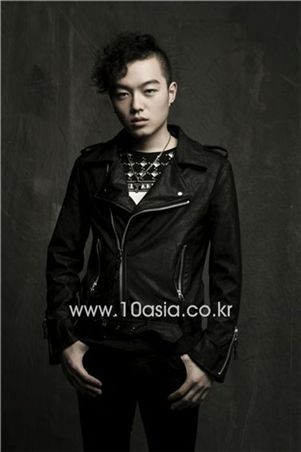 썝蹂몃낫湲 븘씠肄
10: How did Koxx form?
Lee HS: We're all colleagues at the department of applied music at Howon University. Oh, Shaun is our junior. On December 31 of 2008, those of us who do rock music decided to throw a party to have fun on the last day of that year.
Shin Saron: It's not there anymore but we held a party at a place called Monghwan in the Shinchon area. And at the time, we partied while playing music by Cazals, The Strokes, Foals and Franz Ferdinand. Shaun deejayed. We also actually wanted to invite people different from us, people not in our major, so we asked around before handing out the invitations.
Lee Soo-ryun: But it ended up being a class party.
Shaun: It was like a orientation on the first day of school. (laugh) But we did a countdown as well -- I shouted out 3, 2, 1 and then threw cups in the air for everyone to drink out of.
Lee HS: Some people put the drinks in water guns and were shooting each other. (laugh)
Park: I was in the bathroom when Shaun did the countdown. Then I checked my cellphone but I saw that it hadn't turned midnight. (laugh)
Shaun: Well, it could've been that your mobile phone was a bit off.
Lee HS: We decided to form Koxx after that party because it just seemed like a great combination. Of course, although there was a change in one of the members in between.
Park: Shaun and I were in a different team back then. I got to join Koxx naturally in July 2009 while helping out the group when one of the members of the group was away in the United States for about a month. Shaun joined around November.

10: So you settled in during that month-long gap. (laugh)
Park: Back then, the five of us all slept over at one person's house after another after performing at clubs so I didn't go home for almost a month. So I was able to become very close with them in a short time.
Shin: We called it the Koxx tour. (laugh)
Park: And everyone apologized to the member who came back from the States. 10: So the daily schedule of drinking-performing-drinking-going home that you showed in your music video for "Trouble Maker" is true? (laugh)
Park: We were actually worse off than what you see in the music video before we joined the company. (laugh)

10: You made yourselves known and signed with a label through EBS' "Hello Rookie." What memories do you have of back then?
Lee HS: We signed up for it because Saron asked what we should do about it, it being the last audition of the year. And we said, "Well, okay." We actually didn't have a song to audition with before that. (laugh) They were going to judge us based on two songs and we had finished making exactly two songs. "Acdc" and "Trouble Maker." We had no idea that we'd be chosen as the "Hello Rookie" for November though. Of course we yearned for it and prayed we'd get it. But we really did!
Lee SR: We auditioned thinking, it's the last audition of the year. And we had decided to somehow complete our demos and distribute it to labels at the end of last year. But we won the "Hello Rookie." We had our hopes up so we went crazy when we heard the results.