The child of a concubine in a conglomerate family who has deep wounds in his heart and the poor woman who has to struggle desperately to survive and provide for her burdening family. The plot of TV series "Gloria" is openly cliche. The characters are familiarly placed in the drama like standardized options -- from the friend of the female lead who is too caring that it is hard to tell whether he is a friend or a brother, to the young child who is smarter than adults and the conglomerate family members who act indifferent and arrogant. The show's settings -- the bustling single-room apartment in a poor neighborhood and the nightclub on the city's outskirts -- look so outdated that they feel almost unfamiliar. When one gets kicked out of the building by the landlord, it always rains outside. And the male lead who tries to soothe his own distressed heart throws his fist at a mirror, of course. It is interesting, however, that after laying out all the worn-out and run-down scenes, what "Gloria" ultimately wants to tell is a story about 'dreams.' Of course, numerous dramas have already shown the story about women who failed at their family life achieving success in society. But the dream of Na Jin-jin (played by Bae Doo-na), the heroine of "Gloria," is not a substitute for a successful family life. At the end of the second episode, the woman who, at the age of thirty, discovers her talent by chance and tastes her second happy moment, eventually realizes that one needs not only bread but also roses in life. And that is when the drama finally explains Jin-jin's personality, which had been somewhat exaggerated.

The energy is already abundant in the series. What the drama will show from now on is where it will direct that energy. The combination of writer Jung Ji-woo who prefers particularly nice stories and director Kim Min-sik, whose talent lies in telling a story about small, comfortable things, makes one predict that they may not be able to show Jin-jin's challenge as something unprecedently radical or progressive. But even if the show takes a predictable step, "Gloria" can become a pretty good production if it does not lose the value of dreams. The reason being that, in a time slot that often plays dramas about affairs and divorces, choosing a subject theme that is different from the rest is, in itself, a dream and a challenge. 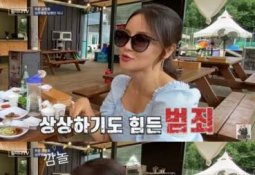