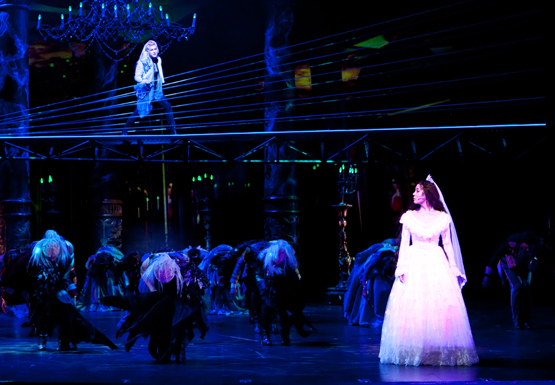 “A third-class romance drama.” It is seemingly difficult to find a better way to define how people perceive the life of Elisabeth, the Empress of Austria. A 16-year-old who enjoyed horseback riding and walking on a tightrope; a woman who became an Empress after falling in love with her cousin Joseph; a woman whose mother-in-law Sophie, also the grand duchess of Austria, tries to control not just politics but Elisabeth’s marriage life; a woman who never saw the baby’s face for three weeks and never raised her own child after giving birth; a woman who took milk away from the people to use it for her beauty; a woman who got a sexually transmitted disease from her husband because of her mother-in-law’s plot; and a woman who got murdered. However, the musical “Elisabeth” tells us that she is a woman who continuously dreamed of her freedom and who fought for herself to stand on her feet.

썝蹂몃낫湲 븘씠肄
There are several reasons why the sound of the audiences’ applause filled the space at the Blue Square Hall in Seoul, where musical “Elisabeth” opened its curtains starting February 8. First of all, the cast is packed with actors who hold musical fans’ incredible amount of trust regardless of the proportion of their roles, such as Kim Sun-young and Ryu Jung-han. Park Eun-tae, who plays Lucheni in the show, made the strongest impression ever than any other roles he has played in his past musical career. Yoon Young-seok, who plays Joseph, balanced well in acting between a mama boy and a romancist, and did a good job supporting the character of Empress Elisabeth. For Kim Junsu, who is at his peak of his musical career, his husky voice and over-pronunciation which still clearly delivered the messages in his lines, were unfamiliar to the audiences but very much close to who he was: Der Tod. Kim’s relaxed voice and his evenly flowing breathing sound melted into Tod’s song, a particularly slow one among all 44 tracks. It embraced a strange atmosphere with Kim’s voice. Just like Kim promised that he will play an “active” version of Tod, every bit of his movement had a strong, yet soft, tension. His vocal technique of using his chest and head back and forth breathed life into the relationship between Tod and Elisabeth, who endlessly longed for the death of freedom.

Despite everything, the history of Austria felt even more unfamiliar as the musical adopts the form of “Song-Through,” which means music without lyrics. Adding a vague storyline which is described as “a great love” between Elisabeth and Tod, it was inevitable for the musical to become just another third-class drama like the weekly Korean drama "Love and War." Actors changing their costumes a dozen times and special stage equipments were enough to cover up the extreme storyline. However, those displays were rather the sign of “being too much” or just “too less.” Musical Elisabeth is a piece that depicts the repeating cycle of loneliness in a family. Elisabeth, her husband Joseph and her son Rudolph all cry in one voice not to leave them alone. That loneliness was not just in the castle they live in but it resided in the souvenirs sold outside the stage.

The most important thing in any art product's first premiere is whether it could appeal to the mass public. It is difficult to say what is right and wrong, but this musical holds deeper meanings than defining right and wrong. Tod sprang out as a character in the era when people thought committing suicide was an act of being cool. The reasons are in his drowsy music and dancing. Only when Tod is alive, Elisabeth can awaken from her sleep. The Elisabeth playing in Seoul right now is directed to fit the taste of the Korean audience. Nevertheless, it will need to work on more details for the musical to continue on stage. Musical cannot be categorized under the commercial purpose of art because there are depths and values keep springing up during the performances. It is a question on how much value does the musical Elisabeth can have. ※ Any copying, republication or redistribution of 10Asia's content is expressly prohibited without prior consent of 10Asia. Copyright infringement is subject to criminal and civil penalties.