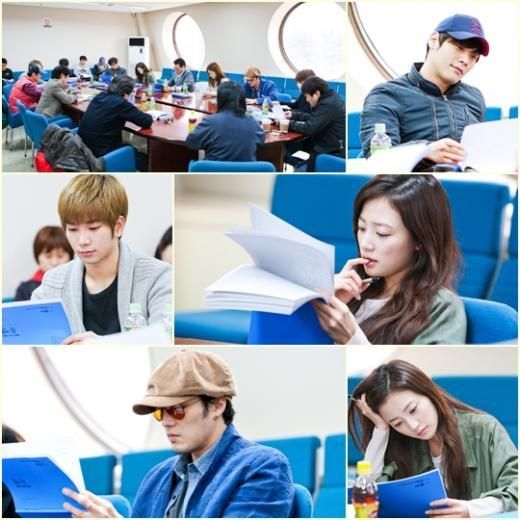 Hallyu star So Ji-sub and actress Lee Yeon-hee have attended the first script reading for their upcoming SBS TV series, gearing up for the crime investigation drama.

Through a press release on Thursday, SBS revealed several pictures of So, Lee along with other cast members Choi Daniel, MBLAQ's G.O and Song Ha-yoon at their script rehearsal for the new Wednesday and Thursday series "Ghost" set to hit airwaves late this month. Helmed by producer Kim Hyung-sik of TV series "Sign," "I am a Legend" and "Cain and Abel," his new project will tell the story of detectives working together to solve cyber crimes.

"All the actors seemed to be relaxed and there was this comfortable atmosphere amongst the cast members during the session. Choi and G.O also received compliments on their acting skills during the practice," an official with the show said in the statement.

So made his debut in 1996 and has starred in numerous TV dramas and movies since then. The actor became a household name in the country and in Asia, with his roles in the 2004 hit series "Something Happened in Bali" (SBS, 2004) and "I'm Sorry, I Love You" (KBS, 2004). He last starred in director Song Il-gon's film "Always" opposite actress Han Hyo-joo last year and recently wrapped up filming movie "Office Worker" with actress Lee Mi-youn.

Lee made her debut in 2001 began her acting career by taking on a small role in "My Precious Child" (KBS, 2004) and rose to fame after starring in "East of Eden (SBS, 2008) with the Korean heartthrob Song Seung-heon.