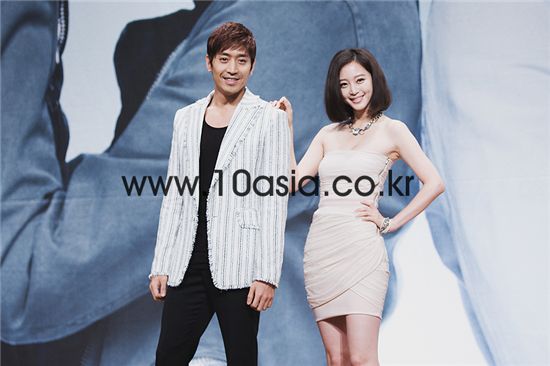 "We are trying to focus on telling the story of beautiful-looking people than larger ideological issues between North and South Korea," director Hwang In-hyuk of KBS TV series "Spy Myung-Wol" said of his show for its press conference held on July 5. Hence the setup of a North Korean spy being sent to the South to fulfill the mission of marrying with the country's top Hallyu star in three months and bringing him back due to the North Korean government being on guard of the Hallyu that has swept its country, may be one that is sensitive and absurd but Hwang emphasized the drama "is about a chaotic romance." And this eccentric romance will be portrayed by Eric, returning to the small screen for the first time in three years and Han Ye-seul playing a comical character for the first time in a drama in five years. Choi Ryu (played by Lee Jin-wook), who likes his immediate subordinate Myung-wol (Han) and Joo In-a (Jang Hee-jin), a top star and heiress to a conglomerate who tries to possess Kang-woo (Eric), joins the two to form a love rectangle.

Eric, who took on "Spy Myung-Wol" as his first project after being discharged from the military, said Kang-woo is a character "that is easy to pull off." There actually are a lot of similarities between Hallyu star Kang-woo who pursues both a singing and acting career and Eric who has been a member of band Shinhwa and has solidified his position as an actor through several drama roles. He said that he is "not trying to be funny since it seems like the drama will be funny anyway" but the Kang-woo revealed in a clip showing the highlights to the show, such as him tying Myung-Wol's shoelaces together when she chases after him while pretending to be a fan, will remind the viewer of Eric's usual playful personality. At the same time, as much as Kang-woo grew up an orphan and went through much hardships to become a top star, he is mostly going to be a professional who is thorough in everything he does. Whether Han will be able to play a character who goes beyond her character Na Sang-shil from her one-time romantic comedy "Couple or Trouble" which earned her the nickname of 'Queen of Romantic Comedies,' will also be key. Considering the fact that she said, "Myung-Wol will is full of curiosity so she's the type that'll go ahead and make the mistakes first which is very similar to what I'm like," Myung-wol will be completely different from Na Sang-shil. Watching her repeatedly shout out, "Sign please"shamelessly after having maintained a serious and cool-headed attitude from secretly guarding the child of a high-ranking official, left quite an impression. However, like she herself is aware of it, it will be her task to "maintain it at a reasonable level while harmonizing with other actors."

It will not be easy to successfully tell viewers of 'a love which transcends boundaries and ideologies' based on the story of spies which in itself is not an easy subject to embrace. The fact that SBS's "The Warrior, Baek Dong-soo" and MBC's "Gye-baek" (tentative title), two classics armed with major action sequences, will air in the same time slot too makes it hard to guarantee how successful "Spy Myung-Wol" will be. In the end, you could say that whether the drama will be a success or failure will depend on how convincingly and interestingly Eric and Han depict on the subtle way Kang-woo and Han Myung-wol's feelings change. Will "Spy Myung-Wol" serve as the launch pad to another heyday for the two actors? You can find out through the show's first episode at 9:55 p.m. on July 11.