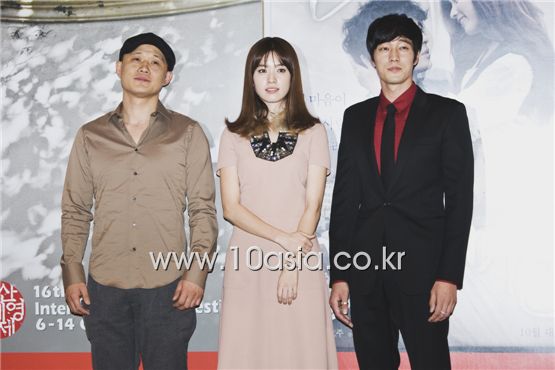 A man finds new meaning to life after falling in love with a woman going blind. Yet they come to face obstacles that get in the way of their love.

At first glance, "Always" may sound like your typical melodrama but director Song Il-gon says he wants to remind people of the true value of love through his film inspired by Charlie Chaplin. Song made the remark in Busan on Thursday while attending a press conference for the pic starring So Ji-sub and Han Hyo-joo which will also open this year's Busan International Film Festival later in the day.

"Because I wanted to write about a love story occurring in the city, I started from Charlie Chaplin's 'City Lights' where Chaplin loves a blind woman," Song said of the 1931 pic which he also said is his favorite movie.

He then explained, "I came to think that we live in times where the really important emotions are no longer important. We've forgotten what love used to mean but it's actually such a common and simple emotion that I wanted to tell about it." "We've come to believe that love is cheesy and something from the old days but it is actually the most important value...... A man waiting for a woman forever may sound nonsensical nowadays but I think it's a sentiment that still holds valid."

"Always" will show during BIFF, running from October 6 to 14, and is set for a release in local theaters on October 20.

Song's work "The Picnic" (1998) was the first short film in Korean filmmaking history to win a Cannes Jury Prize and his 2001 pic "Flower Island" was a New Currents award winner at BIFF the same year.


So Ji-sub & Han Hyo-joo say...
Below are the remarks by actor So Ji-sub, who plays Jang Chul-min, an ex-boxer with a rough past that works as a water delivery man during the day and a parking lot attendee at night and actress Han Hyo-joo, playing a telemarketer named Ha Jung-hwa, who gradually loses her eyesight due to an accident.

Q: How do you feel to be showing your movie as the opening film for this year's BIFF?
Han Hyo-joo: I'm very nervous because this is the first time we're showing our movie but I hope it'll receive a lot of love because I really shot it with all my heart.
So Ji-sub: It's the first time I watched the entire movie today. I still have some lingering feelings from it. It may seem a bit like a classic and is heartbreaking but I think it's a very heartwarming film.

Q: Tell us about your experience with playing your characters.
So Ji-sub: I chose this project because it had a happy ending to it. But my initial concern was whether I'd be able to love Jung-hwa who is losing her eyesight. So I thought about it to myself a lot and discussed it with the director but we came to the conclusion that there are no reasons for loving someone so it became more natural to play my character. But I did have a lot of emotional scenes to shoot and it was difficult to maintain those emotions.
Han Hyo-joo: I didn't have an easy time playing my character either because it may be easy for someone with so much pain to cry but not to smile. So having to stay cheerful and playing someone who has a visual impairment was so tough and burdensome that I became a bit sensitive at times.

Q: What was most challenging about playing your role?
Han Hyo-joo Playing the role of a visually impaired person was much more difficult and frustrating than I thought it would be because I had to pretend I can't see when I can and the slightest mistake could make people think that I was being fake. But once I got used to my character, there were moments I felt happy. And it was difficult to maintain my emotions which I think makes movies more difficult than dramas.
So Ji-sub: This is the first time I realized that doing romantic movies is much more difficult than doing romantic dramas. Your emotions move along quickly in dramas because the stories move forward quickly but for this film, I had to depict on a single emotion throughout which was extremely tough to do. And the action sequences... They're getting tough too now. (laugh) I learned to box a month before the movie went into shoot but ended up hurting both hands right before the movie cranked in so I had an extremely hard time with it.

Q: What is your single favorite and most disappointing scene in the movie?
So Ji-sub: A single scene? When I worked out topless? (laugh) But there are a lot of scenes I wish I did better at. No actor is ever 100 percent satisfied with their acting.
Han Hyo-joo: I think it's extremely difficult for an actor to be satisfied with one's own acting. The scene I liked was when we kiss. (laugh) It came out beautiful.