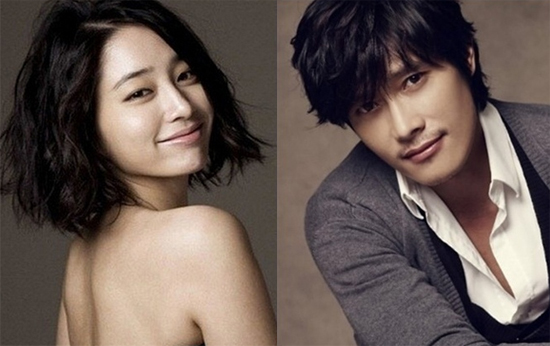 Hallyu star Lee Byung-hun and actress Lee Min-jung have admitted that they are in a romantic relationship, which turns out to have begun early this year.

On Sunday, both Lee Byung-hun and Lee Min-jung posted handwritten statements on their official websites acknowledging their budding romance.

The pair have finally admitted to being together after reports and rumors surfaced as they were spotted together having dinner at a wedding in March.

However, their relationship regained spotlight earlier this week when news broke out that the two were planning on a November wedding after visiting a Hanbok [traditional Korean costume] shop.

Lee Min-jung's statement read, "As a woman, an actress and a daughter, I had many worries and concerns but now I have the courage to speak out about our relationship. I hope that with the support of the public that we can continue on with our relationship as a happy couple." "We are still careful about the future, and we are quite serious about one another and we will be the first ones to announce to the public on any other news about us."

Additionally, Lee also left a personal message on his official website saying, "I am writing this letter just a few weeks before leaving Korea to focus on my acting activities overseas in 2012. I have found someone that I want to be with. That is why we have both made the decision to tell our fans about our relationship."

Lee continued, "I first got to know Lee Min-jung at a gathering with other actors and slowly yet carefully began our relationship after we met each other again early this year. But we were taken aback and extremely hesitant once rumors broke out about relationship."

"However, we apologize for not telling our fans first about our relationship......we extend our deepest apologizes to our families, fans and our agencies for not coming clean with the truth though we ask for your understanding."

He ended his letter saying, "Now, I can surely say that I have found that important person in my life and we hope to seriously maintain our relationship."

Lee Byung-hun, one of Korea's most well-recognized actors and a household name in Japan as well, made his Hollywood debut in 2009 through the first “G.I. Joe" flick as character Storm Shadow.

He recently attended a press conference to promote his forthcoming film "Masquerade" and will be heading overseas to shoot "Red 2."

Lee Min-jung is best known for playing the role of Ha Jae-kyung in SBS' hit teenage series "Boys Over Flowers" and landed her first lead role in SBS' weekend drama "Smile, You" opposite actor Choung Kyung-ho.