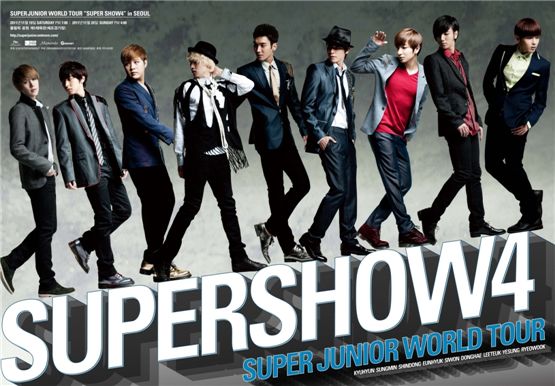 A press release from SM Entertainment announced on Thursday that Super Junior will perform at the Taipei Arena in Taiwan on February 2, adding an additional show to their three-day "SUPER SHOW 4" set for next month.

The boys' have already been slated to take the stage at the Taipei Arena from February 3 to 5.

The press release then explained that the decision for an additional date in Taiwan was made since tickets for all three shows sold out within 17 minutes of going on sale last weekend.

Their show in Taiwan will be the third stop to their world tour which kicked off in Korea in November last year. The group also performed in Japan last month and will take their concert to Singapore, Beijing, Los Angeles, Paris and New York.

Super Junior has been one of the most popular K-pop bands in the world since their debut in 2005, having released a number of hit songs such as "Don't Don," "Sorry Sorry,” "BONAMANA" and “Mr. Simple” which have topped a number of music charts in Korea and in the Asia region.

They recently took part in various year-end ceremonies and won a number of awards for their songs and as a group.