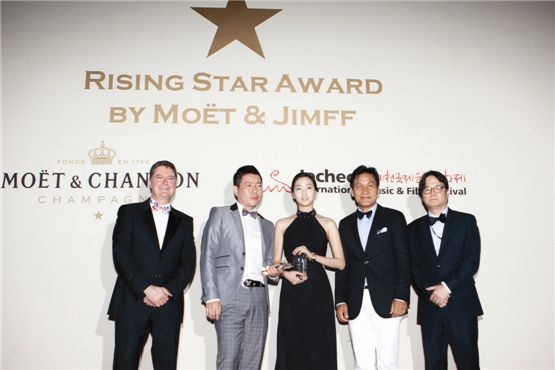 Sponsored by champagne manufacturer Moet & Chandon, Saturday's host, actor Ahn Sung-ki, announced rookie actress Kim Go-eun of "Eungyo" (2012) and director Lee Sang-woo of "Barbie" (2012) as the rising stars of the year by recognizing their commitment and limitless potential in the film industry. "'Eungyo' is a meaningful project that has given me a great opportunity to learn and know many wonderful people. I hope to become a great actress and hope you all watch me through becoming one," Kim said, donned in a long black dress that shows off her figure.

Director Lee's acceptance speech followed next, as he stood before some 60 people in the film industry to express his gratitude for being recognized by his latest feature, "Barbie."

"During the last 25 years of my filmmaking career, I made ten features and 'Barbie' is the only movie that I had an investment. I'm very grateful to receive this award," Lee said. The main award ceremony ended with the two award-winning stars making signing their autographs on the Star Boards, but the night was still young.

The main sponsor, Moet & Chandon arranged a special mini-bar behind and a barbecue grill behind guest tables that kept the party fever going.

To be part of the memorable night where veteran actors and up-and-rising figures in the film industry gather together, actors Kim Dong-wook, Choi Woo-shik, actresses Lee Yoon-ji and Joo Min-ha attended the ceremony.