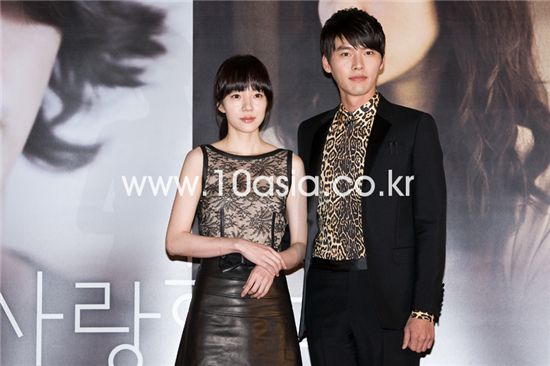 썝蹂몃낫湲 븘씠肄
Hyun Bin, easily one of the happiest actors these days due to the success of his latest works on both the small and big screen, along with the public's high regard for his personal life, has said he is most happiest about his films being invited to Berlin's annual film fest.

The 28-year-old actor made the remark in Seoul on Thursday while attending a press conference for "Come Rain, Come Shine," also starring actress Lim Soo-jung and helmed by director Lee Yoon-ki. A reporter had asked which recent achievement he is most proud of -- the success of his latest hit TV series "Secret Garden," "Come Rain, Come Shine" being selected to compete at this year's Berlin International Film Festival (BIFF), or another one of his films "Late Autumn" co-starring top Chinese actress Tang Wei being screened at the same fest.

He also signed up for and has been accepted into Korea's Marine Corps, reputed as being the toughest branch of the armed forces, as part of fulfilling Korea's two-year mandatory military duties.

"I'm happiest about the invitation to the film festival... it's a great honor to be given the opportunity to step on the red carpet of one of the world's three biggest film festivals at a young age," Hyun Bin explained. He then added that he hopes to get to walk the fest's red carpet and is "looking into it but not sure if it'll happen" since he is expected to serve in the Marine Corps starting March 7.

Till then he will have to simultaneously promote both "Come Rain, Come Shine" and "Late Autumn" in Korea, due out February 17 and 24, respectively, and prepare for his upcoming two-year absence while the BIFF will take place for 11 days starting February 10.

In "Come Rain, Come Shine," Hyun Bin and Lim Soo-jung play a couple who have been married for five years but get ready to separate after Lim's character falls in love with another man.

The film depicts on the emotional realizations and changes the woman experiences regarding her husband while packing her belongings to move out of the house.

Hyun Bin, whose real name is Kim Tae-pyung, rose to fame after starring in smash hit series "My Name is Kim Sam-soon" alongside actress Kim Suna in 2005 and has also starred in other dramas including “World’s Within” (KBS, 2008) and "Friend, Our Legend" (MBC, 2009).

Lim, 30, has appeared in numerous dramas and movies since her debut in 1998 including the hit TV series "I'm Sorry, I Love You" (KBS2, 2004) and films and blockbuster fantasy flick "WOOCHI" (2009) opposite Korean actor Gang Dong-won. Her latest film was "Finding Mr. Destiny," a film based on a hit musical co-starring actor Gong Yoo.