※ explorer 11, Microsoft 엣지 44 이상의 버전에서 이용 가능합니다.
인쇄하기 스크랩 RSS
폰트축소 폰트확대
During the performance of their new song “Knockout,” T.O.P, during most of the time, either stood still or moved slowly when he rapped while his partner G-Dragon (GD) moved wildly around the stage. But no one would dare say he moves less for their performance of "Knockout" only becomes complete when GD’s swiftness is combined with T.O.P’s heaviness along with the presence of their unique characters that are as different as their hairstyles. Furthermore, T.O.P has the ability to 'eat up' the audience with the most unexpected movements. He once used to be one of the five members of Big Bang who worried over his lack of dancing skills but he can now capture people’s attention without so much as moving a muscle. Here is T.O.P's remarks about performing on stage, his thoughts and his confidence. 10Asia will publish its interview with both T.O.P and GD tomorrow. 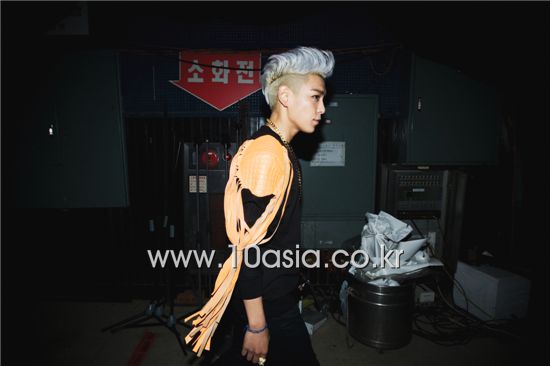 썝蹂몃낫湲 븘씠肄
10: Of all the days, I'm interviewing you on Christmas (Laugh). You must already be exhausted from yesterday's concert and here I am bothering you with this.
T.O.P: It’s alright (Laugh). What did you think of our performance? 10: I posted few photos from your concert on my Twitter account and was hated by a few followers. They called me selfish for having fun by myself (Laugh).
T.O.P: I guess I'll have to say I'm thankful if they think of our concert that way. (Laugh) When doing concerts something can always go wrong such as problem with sounds but it is our duty to make the best out of even the worst situations. I’m also grateful to everyone who was there with us and how they put in much effort to help us enjoy ourselves. It's been a while since we've performed on televised shows as well but I feel heartened and happy performing thanks to their consideration and great stage preparations.

10: Your performance seems to have changed from the past. For example, at your YG Family Concert, you suddenly approached a fan in the standing area of the stage, stuck your face right in front of hers, and started rapping.
T.O.P: It wasn’t anything calculated beforehand or anything. While performing together with Ji-yong [G-Dragon] we already have a picture of what to do but all the small things are improvised. I think that’s the kind of power we came to gain while being in show business for past few years. Just like with acting, the emotions we deliver are feelings that we get from our music, not something that's pre-arranged. I believe it comes from our confidence.

10: You seem to exude more confidence in both the music in your newest album and stage manner. And the expressions you use in the lyrics for "Knockout" was interesting. Any special reason for such change?
T.O.P: It has more to do with how I've been questioning myself during the past year than there being a particular reason. In the past I used to wonder "Why am I doing this?" There were some things that burdened me greatly, leaving me to wonder whether I’m doing something that may be too much for me. But as I grew older, I changed the question to “What does the public want from me?” 10: Are you saying that the answer was your confidence?
T.O.P: Don't people get vicarious satisfaction from entertainers on stage and gain confidence for their lives? I think that is why my rapping started to include the lyrics there were in “Turn it up,” and same goes for the album. It wasn't just to look cool or bluff. Even if I show off a bit, I wished for those listening to my music to be proud of themselves in the way I'm proud about my career. I’m not sure how it'll be accepted by listeners but I put a lot of thought into the lyrics.

10: Is that the reason you shared your name with a well-known brand and expressed yourself as a brand as well? It seemed as if you were saying “You can accept me like that, so I am” to people who observe and judge you.
T.O.P:I've became a bit bold. I've always been careful about such things because I think and worry a lot. But when I looked back on what I've done, I decided that going the way I've decided to after thinking about what it is that people want from me and what the right thing is, would be much more refreshing. I also hope that people who are feeling down will feel better as they listen to this music. Regardless of me showing off or not, I wanted to try expressing my sincerity to the extent that it hopefully is easy to listen to and not repulsive. (Laugh). I felt that this was one of the ways I know how to express myself.

10: You used to give off the impression of delving deep into your inner self but now you’ve started to think about how you influence others. How did it become possible to change your thinking like that?
T.O.P: I think I began to think on a broader sense about the world I live in. The world is such a bustling place yet many people go through hard times and can't find the energy to live. And those are the people who care about me, the people who care about Big Bang, or at least the people who listen to our songs. So I felt that it would be nice if they could feel a vicarious happiness by listening to our music. And I wanted to do it in a slightly different way, in a roundabout way.

10: Do such thoughts come from your perception of your position as a singer? If you wish to do something for others, you have to know that you're taking on the role of taking on that much more responsibility.
TOP: When I was younger, I actually felt burdened by and did not like receiving interest and love from people. I didn't know how to enjoy it. But it all became more natural after I stopped being greedy. Greedy about music. I also rid myself of the thought that I need to do something with music. In the past, I remember asking people quite frequently to look forward to our new songs but now, it doesn’t matter if people aren't looking forward to them. But I have instead come to think that I will be someone that can amplify people's expectations. I want to return as much as I have received, and urge myself to work harder to study music. There is so much I want to show in the future.

10: Is this linked to your present situation? You’ve been acting for a while but poured yourself all at once through your latest album.
T.O.P: After returning from working on “Into The Fire (2010)," GD had already started working on music and I started working on Big Bang's music. So much had changed in music world during that time as well including great people promoting themselves. But I had been away from that flow for quite some time so I gave myself a moment to take a step back and re-organize my thoughts.

10: And I think that's how you came to express yourself differently as well. Before, you said you act out a virtual character on stage but in this album, you described yourself as “someone you meet only through a speaker or ear phone.” Did you create a character out of yourself?
T.O.P: Yes. We stand in front of very many people at a young age. And we may have been praised but were criticised as well from which we became tired of because it kept repeating. I wanted to maintain a certain distance from people and make myself seem as someone who exists on the stage or in music. But because satisfying our listeners comes first, much of what I thought for this album was about how I could best harmonize the two.